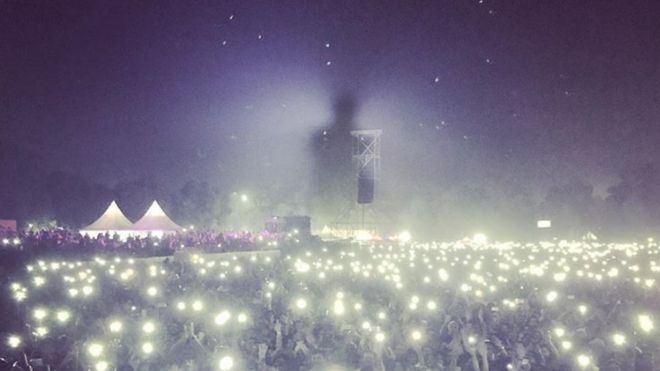 One of the world’s most well-known musician and singer Bryan Adams was stunned at the sight of Delhi pollution when he came to the city to perform. He just finished his 5-city India tour with a massive and glamorous concert in the national capital Delhi. The Canadian rock legend Bryan Adams performed and swayed fans with his crooning. Later, he posted a photograph from the concert, which clearly showed the dust and the pollution that Delhi has come to signify and represent. The sight actually left him stunned.

And he has brought back the focus on the city’s air quality which has plummeted of late. Bryan Adams posted a photograph on social media platform Instagram, which showed the haze hanging over the venue of the concert. He wrote: “New Delhi, India, you were incredible tonight. In this photo, if you look carefully you can see my shadow silhouetted in the dust and smoke of the venue over the audience. I have never seen that before. Magical India. Namaste.”

The people later pointed out that what Bryan Adams witnessed in the form of ‘magical India’ was in fact Delhi smog. The national capital has been ranked as one of the world’s worst places as far as air pollution in concerned. This is a World Health Organization finding. Currently, the Delhi air quality is “very poor” to “severe” as the state government is trying to bring in the emergency Graded Response Action Plan or GRAP.

Bryan Adam took to the concert stage following an act by Bollywood sensation Harshdeep Kaur. He said: “We have been coming here since 1994. It has taken long, and I have always asked promoters, ‘where is my Delhi show’?” He also said: “I have all kinds of songs for you tonight: old ones, a few new ones. I am not sure how much time you have, but we have a long show ahead! Tonight we have the biggest party in India.”

Bryan Adams was clad in a blue T Shirt together with jeans. He kept his fans on their toes with his renditions of his past super hit numbers. A huge video wall set the ball going along with pictures as well as videos of his rock band. However, it is sad that he would remember his concert due to the Delhi air pollution.