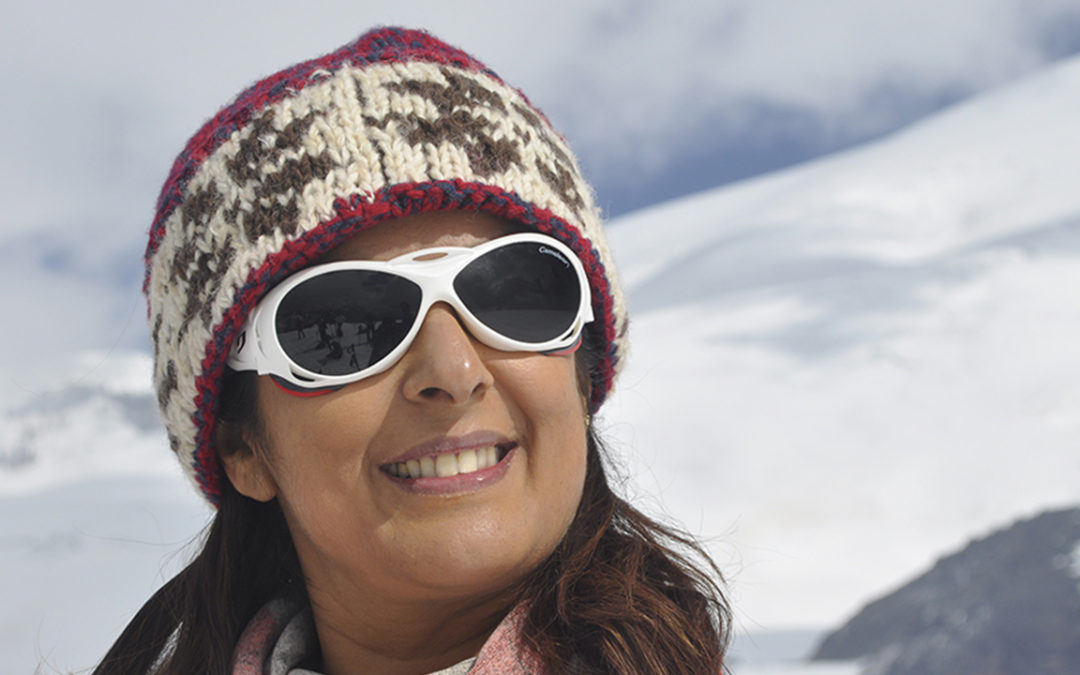 Eve teasing, groping, molestation, rape, acid attacks, etc. keep happening in India with alarming regularity. Women have been subject to several forms of violence, particularly in India. Official statistics reveal that one woman gets assaulted every 20 minutes. This scenario can change for the better. A revolution started with the Nirbhaya murder and rape case in 2012. There are many who chose protests, candle light marches, social media, and editorial intervention to raise their voice for the safety of women. They demanded change of outlook in the society and aspire for a set-up where women and men are treated equally and there is legislation to support gender equality.

However, successful entrepreneur, avid mountaineer, and compassionate humanitarian Sangeeta S Bahl chose to climb mountains to raise awareness over the issue of women’s safety. Born in Jammu (Jammu & Kashmir), Sangeeta S Bahl is talent, grace and acumen personified. She has conquered many facets of life and now wants to climb the Mount Everest, the latest in her to-do list.

“I am excited to go back to Mount Everest. It is an ongoing journey which is in line with the climbing of seven summits of the world. I am going back with more force, vigor and training armed with the knowledge of last year’s attempt, I have worked on other aspects of my climb.

Sangeeta is a self-made woman who started working at the age of 16. After dabbling in modeling and doing a stint in TV serials, she went on to become a Miss India Finalist. After a successful career as Cabin Services Director while flying for Emirates Airlines, she is now the Founder Director of Impact Image Consultants. Sangeeta aids Individuals and Corporates who seek help with personal Image and Style. She is also a Keynote Speaker and Trainer, who specializes in mentoring and coaching individuals, along with corporate staff. She recently tied up with with Tata Memorial Hospital for a women cancer initiative to raise awareness for breast cancer.

At the age of 53, she is bristling with energy and is determined to achieve her goals.

“Age is just a number. There’s no barrier to age when you wish to achieve something. All limitations are set in mind. Make mind your best friend. Pursue your passion and stay unique!” she says. When asked what she plan to achieve from the feat, she says: I hope to achieve more fulfillment of my own self as it is a huge personal challenge. Of course it will add to my summit no 6. Self-reliance and skills in climbing are the single most crucial components to have when leaving the Everest Base Camp. You are on your own after that,” she reminds.

Sangeeta S Bahl also has strong ties with her community. Her NGO Impact Women Power Association strives to highlight the plight of women in India from all walks of life as well as bring awareness for a positive change in the society. Currently, the Impact Women Power Association is focused on women in her home state of Jammu & Kashmir. Through its efforts, she hopes to empower local women and bring them out of their comfort zones and make them independent. To realize her mission, she has organized several treks for women in J&K as well as in Himachal Pradesh. Her women empowerment and gender equality plans also include endowing women with the skills and training to make them employable.

“All limitations are set in mind. Make mind your best friend. Pursue your passion and stay unique!” is her advice for women taking up unconventional professions.

Acutely aware of the arduous journey that she undertook on her way to glory and having faced hardships like no other, Sangeeta is hugely aware of how much impact her organization can make on these women and for gender equality, as well as those all over the country. Hence, her resolve to climb for such a cause. Sangeeta attempted to scale the Mount Everest in May 2017. Her journey to summit the world’s highest peak, Sagarmatha, continues. As the world celebrates the International Women’s Day, this is a strong message for women across the world for gender equality.

Sangeeta S Bahl, a spirited enterprising entrepreneur and determined Mountaineer, unleashes her passion to scale the world’s highest peak and resonates with the spirit of #IAmTheDrive, #TimesWomensDrive2018