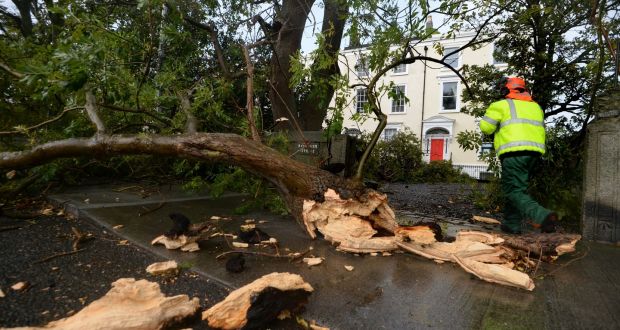 At least 3 people have been killed as Hurricane Ophelia hits Ireland, causing damage worth millions. Skies in the UK turned red. Tropical cyclone Ophelia rammed several parts of Ireland with winds blowing over 90 miles an hour. As Ophelia’s status upgrades to a Category 2, many people in Ireland are in for the worst storm since the year 1961. Ophelia, a tropical storm, has become the tenth Atlantic storm in a year to grow into a hurricane or cyclone. After 1893, this is the first time that a number of tropical storms have gone on to develop into hurricane strength. Moreover, we could still be counting as the hurricane season continues throughout October. There could be greater destruction.

Several of the 10 Atlantic hurricanes managed to reach the USA, leaving dozens dead and resulting in billions of dollars in damage. Although, Hurricane Ophelia may not reach America, some others such as Hurricanes Harvey, Irma, as well as Hurricane Maria, Nate did. The USA as well as the Caribbean were devastated by two of the severest hurricanes in history: Hurricane Harvey and Hurricane Irma. The storms left the Virgin Islands and Puerto Rico facing a humanitarian crisis. The remarkably powerful storm season has struck after years of dormant hurricane activity. No major hurricane, like a Category 3 or stronger storm with wind speed of more than 111 mph has struck the USA since the year 2005.

Hurricane Ophelia has resulted in severe destruction in Ireland, particularly the western seaboard as well as the flood plains of River Shannon. The latest hurricane is nonetheless one more wake-up call for urgent steps to control climate change and global warming: the biggest global crisis facing human beings. On the other hand, Ireland is facing several problems with regard to reduction in greenhouse gas emissions. The structure of the Irish economy and the results of restricted private as well as public investment over the past few years has done little to offset the effects of climate change and global warming. The country will have to take concrete steps to reduce emissions, many of which will entails substantial costs but keeping in mind the growing vagaries of nature and extreme climate conditions, turning a blind eye to the crisis knocking on the door will not be a good idea.

Chorus increases for action on climate change due to Hurricane Ophelia

A majority of Americans have started believing that global warming as well as climate change both were responsible for the severity of the Atlantic hurricane season and which affected Florida and Texas, according to a Washington Post-ABC News poll. This marks a significant change of opinion in the past decade. Earlier, most of the people used to deny the effects of global warming in intensifying weather events. According to the 2005 Washington Post-ABC poll, which was taken soon after Hurricane Katrina lashed the Gulf Coast and New Orleans, only 39 per cent of the Americans said they believed climate change to be increasing the intensity of hurricanes. Now, a huge chunk of population has started believing the doctrine and the number consequently has risen to 55 per cent.

With increase in data gathering, scientists are more confident in connecting weather events like hurricanes to climate change. Also, several researchers are now categorical that rising sea levels, warmer oceans, and global warming are contributing to extreme weather conditions. Although they may not be the sole reasons for natural disasters, they could be significant contributory factors to more intense as well as frequent storms.

“Harvey was not caused by climate change, yet its impacts — the storm surge and especially the extreme rainfall — very likely worsened due to human-caused global warming,” said Stefan Rahmstorf of the Potsdam Institute for Climate Impact Research after the hurricane.

Climate change is the main reason for the increasing intensity of natural disasters such as hurricanes. It is now converting a Category 2 or 3 hurricane or tropical storm to a Category 4 or 5 extreme weather event.