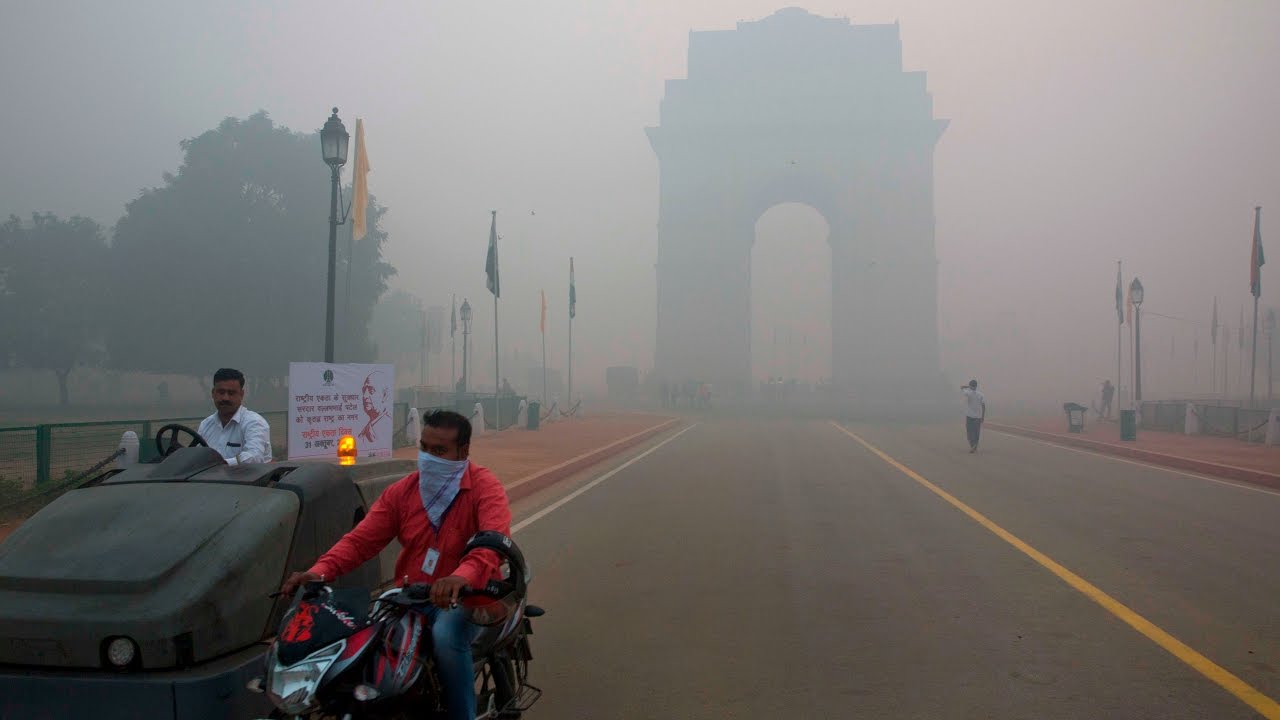 Pollution in Delhi has hit hazardous levels. Smoke from the stubble burning going on in the Indian states of Punjab and Haryana together with moisture is fast turning India’s National Capital into a veritable ‘gas chamber,’ a term used by Delhi Chief Minister Arvind Kejriwal in a tweet. The Delhi smog is affecting visibility, and trains and flights. It is permeating homes and underground metro stations, making it quite difficult to breathe and leading to watery eyes. Air quality index is five times worse than the limit considered unhealthy by the Central Pollution Control Board.

Delhi’s Deputy Chief Minister Manish Sisodia has announced closure of primary schools due to Delhi smog. Environment Pollution (Prevention and Control) Authority, which has been mandated by the Supreme Court of India to enforce the Graded Response Action Plan (GRAP), has asked states to prepare for measures such as ‘odd-even‘ due to the “crisis situation”. The EPCA has also announced implementation of all measures under GRAP’s severe category in the region till further notice. The air quality index is in the ‘severe’ region (score of 448 out of 500) for the second time in 2017. Earlier, Diwali fireworks triggered similar levels of air pollution in October.

Delhi Chief Minister Arvind Kejriwal has tweeted: “Delhi has become a gas chamber. Every year this happens during this part of year. We have to find a solution to crop burning in adjoining states.” “Considering high level of pollution, I have requested Manish Sisodia, Education Minister, to consider closing schools for few days.”

Moreover, the National Green Tribunal has reportedly demanded an explanation from governments of Delhi, Uttar Pradesh, Punjab, and Haryana on why steps were not taken to prevent the situation despite knowing Delhi smog could occur.

Last year, Delhi faced its worst spell of smog in two decades, when air quality dipped to hazardous levels. In 2016, air pollution was 40 times higher than the permissible limits internationally and 15 times that of Indian standards. Persistent smog plagued the city after the cracker bursting spree in Diwali. In 2016 November, a million kids had to stay away from school and thousands of workers had to report sick. Thousands of people lined up in queues outside medicine shops to buy face masks to combat the worst pollution in 20 years.

On Diwali this time, air quality dipped drastically in Delhi, along with other cities such as Chennai, Kolkata, and Hyderabad. In Delhi, air pollution hit 20 times the safety limit set by the World Health Organization (WHO). This happened despite the Supreme Court’s Diwali cracker ban. Particulate matter (PM 2.5 and PM 10) ranged from “severe” to “very severe”.

The smog affects all: children, senior citizens, construction workers, street vendors, and sportspersons. Senior citizens are particularly vulnerable. At the severe level of air pollution, healthy people will also be affected. On the other hand, people with existing respiratory diseases are bound to be severely impacted. In some parts, air pollution has breached the maximum level, according to US Embassy’s real-time air quality index. In RK Puram, it was 999, beyond which readings are not available. The level is equivalent to smoking 50 cigarettes a day. This is medical emergency.

This has spurred the Delhi government into action, prompting them to come out with a slew of measures to prevent the situation from spiraling out of control. Delhi’s deputy CM Manish Sisodia has said that further emergency measures like banning truck entry and suspension of construction may be implemented if pollution level rises further.

According to the CPCB, pollution peaked after moisture-laden winds from Uttar Pradesh, together with hot winds carrying stubble burning emissions from Punjab and Haryana, hit the city and creating Delhi smog. The situation is unlikely to witness dramatic improvement over the next couple of days. In fact, it could further deteriorate.

According to a study by The Lancet, air pollution kills more than 5.5 million people globally every year, with half of the deaths coming from India and China. India is No. 1 in the world as far as pollution-related deaths are concerned, with 2.51 million people being killed in 2015. Firecrackers, construction, vehicle emissions, burning of crop stubble, smoke due to fires lighted by the poor for cooking and heating, as well as industrial emissions are all contributing to the noxious air. A WHO survey of more than 1600 cities has ranked Delhi as the most polluted.