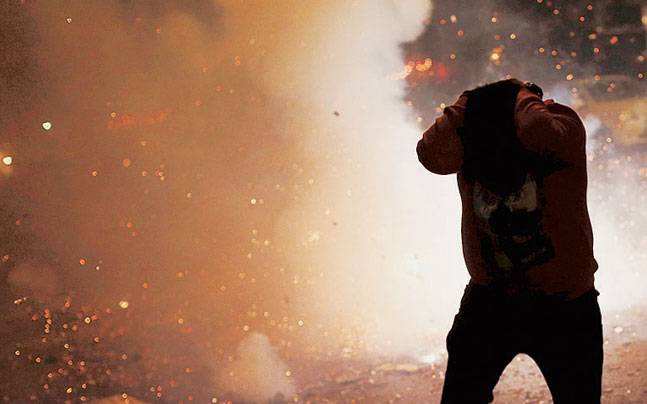 The Supreme Court of India banned the sale of firecrackers in Delhi and the National Capital Region (NCR) to prevent Delhi pollution levels from shooting up. This was a big step towards curbing the toxic air that prevails during this time of the year in one of the world’s most polluted cities. The SC suspended licences which “permit sale of fireworks wholesale and retail within territory of NCR.” Civil society groups also came together all over the country to campaign for a green Diwali and how to celebrate Diwali that is pollution free. However, the Diwali firecracker ban failed to arrest deteriorating air quality levels. There was slight improvement, if one compares data available from the previous year but it certainly does not seem to be enough.

According to the empirical data available, the air quality went toxic on Diwali night. This forced people living in the NCR to breathe hazardous air. According to data by the Central Pollution Control Board (CPCB), Delhi pollution levels around Diwali this time were lower compared to that recorded in 2016. The Air Quality Index or the AQI on October 19 was 319, which falls in the very poor category. Compared to the previous year’s numbers, it is better: AQI in 2016 shot up to the severe level with the index vrooming to a value of 431.

According to the System of Air Quality and Weather Forecasting and Research (SAFAR), ultra-fine particulate matter, capable of entering the human blood, was around 10 to 20 times the limit allowed for air pollutants. In some parts of the national capital, such as South Delhi’s RK Puram, the air pollutant levels were very high, with particulate matter (PM) much beyond the permissible limits. In places like Punjabi Bagh, particulate matter crossed 1600 micrograms per cubic meter around midnight, whereas at Mandir Marg, it was almost 1046 microgram per cubic metre around 1 AM.

Legislation not enough to save the environment

The Supreme Court ordered Diwali ban had raised expectations of a green and clean Diwali or festival of lights. There clearly needs a lot to be done if Delhi has to be rid of its toxic environment. Recordings of pre-Diwali air pollution kept hopes alive. However, air quality nose-dived as the evening wore on and the residents of Delhi went all out to burst the crackers that they had hoarded for the purpose. And by the time, the night was over, the directive lay in a shambles, with Delhi pollution threatening to breach even the set parameters. Pollution levels reached levels which modern instruments cannot even measure. Moreover, people went outside the state to buy and bring the crackers to the capital; there was no ban on doing that. The next year the court will have to keep in mind that not only sale but dissemination also should be banned and impose a nation wide ban if Delhi Smog like situation has to be stopped from happening.

Common people have to come together and take proactive steps to ensure better air quality levels in the city. The Diwali cracker ban has achieved little; however, there is still room for optimism. A collective effort is needed from the judiciary, the government, and most importantly, the citizenry itself. The right to breathe is an inalienable part of the right to life as mandated by India’s Constitution. It is high time everyone got together to honor this.