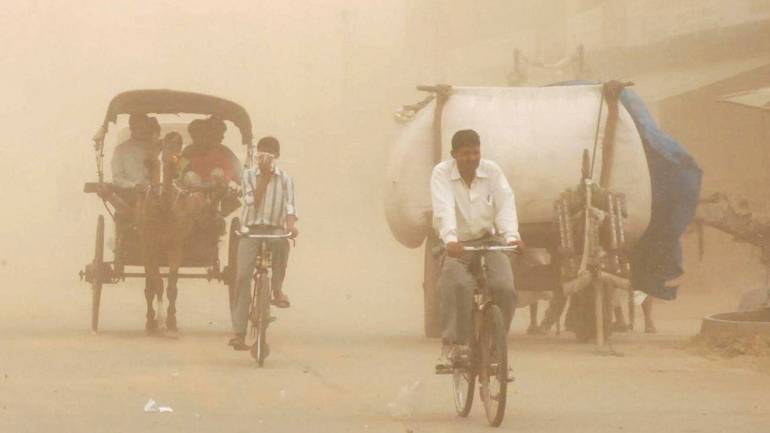 Dust Storms hit Delhi. In fact, the whole of North India has been hit by severe dust storms over the past week. Dust Storms have caused the deaths of about 125 people and has injured several others. It particularly hit the national capital Delhi and adjoining areas, which remained covered in a thick and impenetrable blanket of dust. This pushed air quality in the national capital region to reach the ‘severe’ or ‘hazardous’ level in several areas due to ground-level dust storms in the whole of western India.

Dust Storms in Delhi have led to dusty winds blowing across the region contributed to the spreading of dust. The Met department said that wind speeds reached around 35 km per hour. The laden winds created a hazardous and dangerous haze in the Delhi–NCR region. Despite such winds, the temperature hovered close to 41 degrees Celsius.

Several experts at the Centre for Science and Environment (CSE), a scientific research institute, have said that Climate Change is linked to such an intensification of these extreme weather events like the Dust Storms in Delhi. 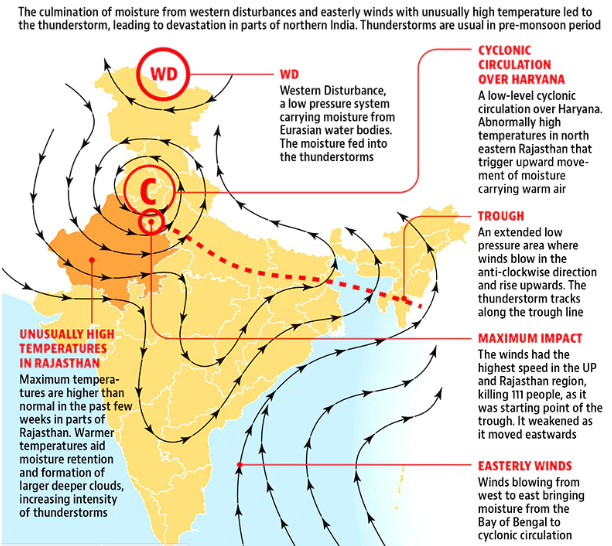 The occurrence of a storm requires moisture, high temperature, as well as atmospheric conditions which can move the warm moisture laden air upwards.

• High Temperature prevalent in North India, especially in areas of Rajasthan (Attributed to Climate Change).
• Due to high temperature near the land, the hot air was pushed upwards to form stormy clouds.
• Moisture from easterly winds coming from Bay of Bengal and western disturbance coming from Eurasian waters.

In places where the clouds lack moisture, the strong upward movement of hot air only contains soil particles. Since the moisture was low in North Indian states such as Rajasthan and Haryana, there was the formation of dust storms instead of thunder storms. An increase in the temperature due to climate change thus meant the upward rise of air mass with the capability to absorb more quantum of moisture, formation of intense storm clouds, which produce more rain and high speed winds.