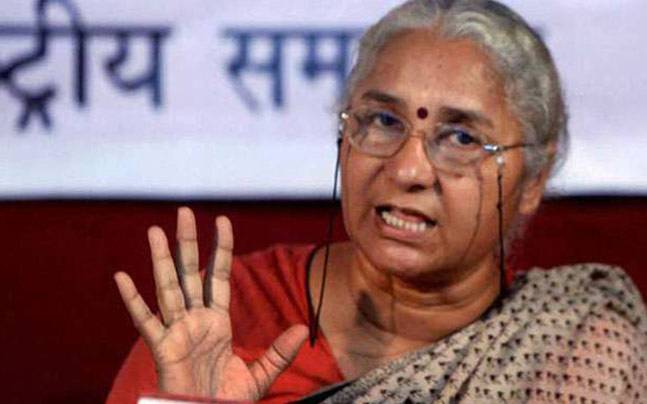 Environmentalist as well as rights activist Medha Patkar says that the Narmada river is the most important issue facing Gujarat Assembly Elections 2017. She says politicians have usurped natural resources of the state under the garb of development.

“There is no Narmada for Gujarat today, and that’s why it is the biggest issue in Gujarat Assembly Elections 2017 today. Sardar Sarovar Dam has been inaugurated as well as dedicated, but Gujarat is dry. For the downstream population, the Narmada is dead. For 100 km down stream, the river today is nothing but a dry bed. For rest 50 km, the sea has ingressed,” says Narmada Bachao Andolan (NBA) spearhead Medha Patkar.

“Industrialists as well as politicians have looted natural resources of the state of Gujarat. Tourism companies like those of Ambani have been given access to the Narmada waters. Reservoirs are being channeled towards industrial areas. Every day, 5 crore and 41 lakh l of water from Sardar Sarovar Dam is going to companies,” claims Medha Patkar, while speaking to greenubuntu.com.

Medha Patkar is a founder of the National Alliance of People’s Movements (NAPM), an NGO (Nongovernmental Organization) comprising hundreds of progressive organizations in India. Her organization, Narmada Bachao Andolan, has been leading mass struggles against inequity, displacement, non-sustainability, as well as injustice. She has written several books on environment and has been the recipient of many awards. She has also been involved in struggles involving effects of climate change as well as global warming.

Water from Sardar Sarovar Dam to be diverted to industries not farmers: Medha Patkar

It is ironical that the ruling BJP has turned the issue over its head and is trying to make this very issue a poll plank. It is making this claim during the Gujarat Assembly Elections 2017 and all that in the name of bringing development to the state. The BJP is also trying to gain political mileage out of the fact that the height of Sardar Sarovar Dam has been increased to 138 meters under the leadership of Indian Prime Minister Narendra Modi. The Central Government claims that the project solves the crisis of drinking water in the regions of north Gujarat, Saurashtra, as well as Kutch.

“These people did not complete studies of the downstream. They did not finish 41,000 km of canals for this micro network that was supposed to take the river waters to farmers. That water can’t reach farmers now in the absence of the micro network. This is the basic reason or the so-called reason for making the Sardar Sarovar and that was to ensure water for the farmers. But what is happening is fooling the people. The water can be taken to industries through pipelines. There is much hungama over development. But what happens to the fate of 40,000 families which are still to be rehabilitated,” says Medha Patkar.

“This is violent approach to nature. The violence is against nature under the garb of development. People say development has gone mad. It is indeed true. Politicians as well as industrialists are relentless in their exploitation of nature. They are making development a tool for vote bank. For that, they can go to any extent and they’re ready to pay price for exploiting resources such as rivers, land, and hills through undemocratic means,” says the NAPM leader.

“There are people who use the produce of forest communities as well as the farmers: people who provide us roti. But the same people don’t think about their livelihoods. This is marketization and commercialization that is not sustainable. Destruction of resources is happening and not just the displacement of people. This violence is against living communities which were the conservators of land as well as forests for centuries,” adds Medha Patkar.