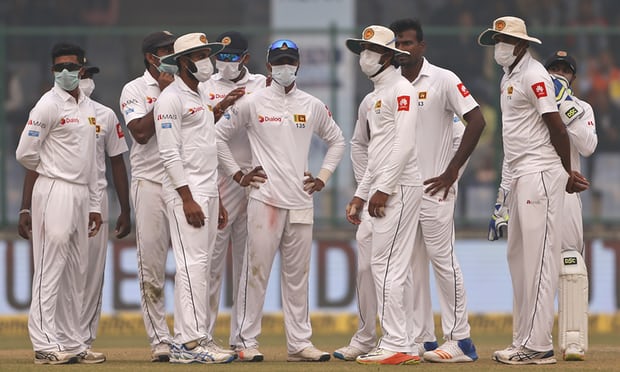 This can send alarming bells ringing across the cricket crazy country. It is equally ridiculous with respect to the deadly air pollution prevailing in India’s capital Delhi. A Test cricket match, being played between India and Sri Lanka, had to be repeatedly interrupted as the visiting team’s players claimed they were “continuously vomiting” due to the dangerous levels of air pollution in the Indian capital. The deadly Delhi smog is causing problems across the board. Pacer Suranga Lakmal doubled over and retched one afternoon during play as levels soared.

Sri Lanka players claim that conditions in Delhi were such that some players were vomiting, even as several others came on to the field wearing face masks. Experts say that this was the first recorded instance when an international match had to be stopped due to air pollution. Air quality was 15 times worse than the World Health Organization (WHO) limits. The deadly Delhi smog accosted cricketers on the second day of the third Test which was being played at the Feroz Shah Kotla Stadium in New Delhi.

With the The deadly Delhi smog getting worse, several Sri Lankan players took to the field after the lunch break sporting masks. They later complained to the match umpires, who stopped play for around 20 minutes in order to consult with team doctors as well as match officials. Though the Test match resumed later but not before it was interrupted twice again. Bowlers Suranga Lakmal and Lahiru Gamage had to leave the field mid-way through their overs with breathing difficulties.

“We had players coming off the field and vomiting,” Sri Lankan Cricket Coach Nic Pothas said after the match. “There were oxygen cylinders in change room. It is not normal for players to suffer in that way while playing the game.”

Just some days back, the Airtel Delhi Half Marathon was held in hazardous air pollution conditions. Due to the high pollution levels, organizers are mulling shifting the event to a new venue or window. Sporting events can turn out to a graveyard for players and athletes. Air pollution can create health emergency like it did when Sri Lankan players vomited.

Air pollution kills millions of people in India every year: The Lancet

India faces environmental issues, particularly capital Delhi. Air quality index has stayed low for the past one month. Air pollution levels is in the hazardous region. Air Quality Index (AQI) is ‘severe’ category in many parts of the capital. The AQI, released by the SAFAR, is in the ‘very poor’ category. There is a medical emergency in the national capital region. Delhi Smog is like smoking 50 cigarettes. Particulate matter (PM) is high; people fighting respiratory diseases have increased in number by three times or roughly 300%. Bronchitis and asthma are commonplace. The Supreme Court intervened and termed the situation life threatening.

Delhi is the most polluted city in the world. Toxic air kills millions of people every year, says the journal The Lancet. The Supreme Court banned firecrackers in Delhi to combat low air quality index. Around 17 million babies stay in areas where air pollution is at least six times the recommended limits. A UNICEF report says their brain development is at risk. A majority of such babies, over 12 million, live in South Asian countries like India and China. The UN Agency conducted a study of children under the age of one year by using satellite imagery in order to identify the worst affected areas and how toxic air pollution affects children, particularly infants.