In this report we bring to you a case study of how Lucknow became one of the most polluted cities of the world. Lucknow is the capital city and pride of the Indian state of Uttar Pradesh which has a population of 2.82 million (Municipal Corporation and Cantonment) as per the census held in 2011. The Air Pollution means the contamination of the air. As per section 2(a) of Air(Prevention and Control of Pollution) Act,1981 air pollution has been defined as, “ any solid, liquid or gaseous substance (including noise) present in atmosphere in such concentration as may be or tend to be injurious to human beings or other living creatures or plants or property of environment.”

Clean air is a primary requirement for the healthy survival of humans. As a consequence of urban development along with energy sector ; vehicular emission has led to the rise of particulate matters. Besides this, there is one more reason for the increasing air pollution and which is the increase of the deforestation rate in Lucknow to build parks, malls and highways which has increased the rate of Carbon dioxide in the atmosphere. It was stated by the MoEF that if a 50 years old tree is cut its value is 50,000 rupees while if it left standing it will value at 25 lakhs. The actual forest cover in Lucknow is about 115 square kilometers i.e. less than 5% of total area of Lucknow (2500 sq km) in 2015. While in 2013-2014 assessment by Envis Centre Uttar Pradesh the forest cover of Lucknow was found to be 321 square kilometers i.e. 12.7% of total geographical area of Lucknow. It has been revealed that to build the Agra-Lucknow Greenfield Express Highways; more than 27,000 trees were axed.(TIMES OF INDIA 28 January,2015) There is large scale felling of trees along the Raebareli Road to widened the roads and accommodate an increasing number of vehicles.

Human behavior over the last few decades has changed the global atmospheric condition. The emissions from automobiles, industrial activities, urban development, intensification of agricultural practices has escalated the levels of the harmful gases like CO2, CO, SO2, NO and Particulate Matter(PM) which is changing the condition of the atmosphere and in turn harming us.

The study accounts the data of the last three months i.e. of January, February, March, April, and May 2018 and the comparison to evaluate the increasing levels of pollution from last years. The data has been collected from the U.P Pollution Control Board.

Power plants as well as industries are stationary sources of pollutants, affecting air quality in a limited area, while vehicles being mobile pollute the atmosphere to a large extent. Gases emitted from vehicles are carbon monoxide, sulphur dioxides, nitrogen oxide, suspended particulate matters, hydrocarbons, and lead. In the year 2013 too, Lucknow was ranked as the top most polluted city of India. 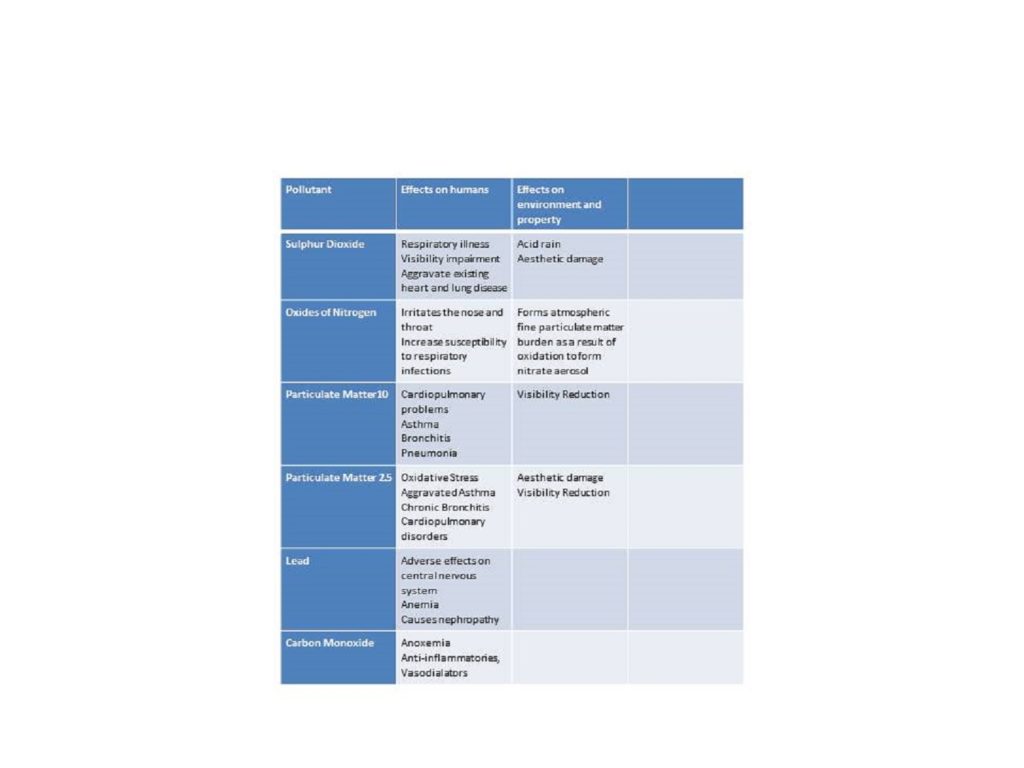 The main causes of air pollution in Lucknow are the following:-

• Vehicular emissions and day-by-day increasing private vehicles on the road.
• Rapid urbanization at the expense of greenery.
• Industries surrounding Lucknow.
• Unconsciousness and apathy of the government and public toward this problem.
• Burning wood for fuel purposes.
• Burning of the garbage.

Air Pollution is now one of the most common occurring factor, threatening human health to a great extent.

• Air quality of Lucknow according to analysis of last nine years air quality data shows a more or less stable trend for SO2 and a declining trend for NO2, both lying within the NAAQS. For PM10 increasing trend is seen which exceeds NAAQS. (As per CPCB,2012 report)
• As per report of WHO,2014 the annual concentration of PM10 was 219ug/m3
• As per December, 2015 AQI of Lucknow was 489. The AQI between 401 and 500 is the severe call for the human health hazard.

According to environment expert Venkatesh Dutta, “There is heavy dust load on Lucknow’s air. The city is in transition, with a lot of construction activities, metro work, and smoke from brick kilns polluting the air. The dispersion of pollutants will take time.” According to CPCB, the concentration of PM2.5 in Lucknow was seven times higher than the permissible limit of 60 micrograms/cubic metre, set by the National Ambient Air Quality Standard. (TOI Nov 2016).

Average Pollution Level in 2015 in Lucknow 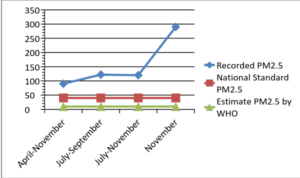 Figure 1
Figure1:The graph is representing the average PM2.5 emission in 2015 in Lucknow. The estimate PM2.5 by WHO is 10 while that of Yearly National Standard is 40. And the emission growth is from 90 to 290 which is a sky scraping emission and hazardous to human health. 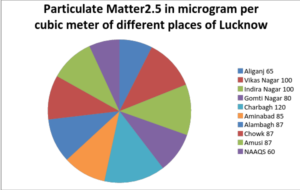 The other air pollutants that too detected as hazardous for the human and for the stable functioning of the ecosystem are Ozone, Oxides of nitrogen, Oxides of Sulphur, Carbon Monoxide.
Air Quality Index of different areas of the Lucknow

To be concluded:
By Geetika Saluja, Public Relationship Manager at Greenpeace International