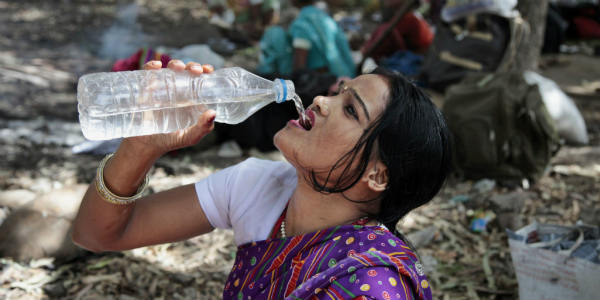 The increasing frequency of heatwaves (1) is a threat to a country like India due to high population, large number of people below poverty line and increased dependence on agriculture. Rising greenhouse gas emissions are responsible for warming of the atmosphere. Intense warming has a profound impact on other components of the climate systems which are pushed towards a ‘tipping point’2 or even beyond it, that renders the system in a state of disequilibrium and leads to occurrence of extreme weather events like heatwaves in India. The study by P. Rohini aims to find out the possible reasons for intensification of heatwaves, by studying various anomalies.

An analysis of geopotential height and wind anomalies at 200 hPa and 500 hPa levels suggests that a “persistent high pressure conditions occur over North India and an anti-cyclonic flow in the middle and upper troposphere cause sinking motion which leads to surface warming due to adiabatic compression” (Rohini et al., 2016). These atmospheric conditions and positive anomalies of outgoing longwave radiation further lead to decrease in amount of precipitation and subsequent decrease in soil moisture. These situations thus create a positive feedback loop and intensify heat. Anomalies of sea surface temperatures of the Indian Ocean and Pacific Ocean suggests that warming of Indian Ocean causes irregularities in ENSO3 teleconnection with the Indian ocean and leads to escalation of heatwaves over India (Rohini et al., 2016).

Depending on the environmental, demographic and biophysical characteristics, the vulnerability4 of different areas to heatwaves might vary across India. Therefore, assessment of Heat Vulnerability Index (HVI) is of utmost importance as it will keep the people informed about the complications they might face in the near future and help decision makers to plan adaptation strategies. An attempt to map different parts of India according to HVI was made by Gulrez Azhar et al. in 2017. The variables which affect the heat-health relationship either directly or indirectly were selected for HVI calculation. These include the demography; age and gender, socio-economic variables which comprise the social class, income and literacy, presence of household amenities and land cover (assessed using NDVI5).

The HVI was categorized into 6 categories depending on the variation of the total value from the mean; “very high” category having the largest deviation and “very low” category having the least deviation. “Ten districts had an HVI score of very high (>2 SD6), most of them in central India in the states of Madhya Pradesh and Chhattisgarh” (Gulrez et al., 2017). These areas are most vulnerable particularly due to presence of large ethnic population that are on a lower end of health, income and education. Apart from central India some districts in Gujarat, Orissa and Jharkhand also had a very high HVI.

Owing to the results of the above study, Gujarat is one of the states highly vulnerable to heatwaves. Exposure to an extent will only harm the internal working of the body, but if it increases beyond a level it would lead to mortality. The 2010 Ahmadabad heatwave is one of the best examples that highlights the increased vulnerability of people towards heat in terms of mortality. A record breaking temperature of 46.8o C was recorded in May 2010 (Azhar et al., 2014). The study used a methodology wherein the all-cause deaths in May 2010 were compared to all-cause deaths in May 2009 and May 2011. The prime reason for taking May 2009 and 2011 as the reference period is because the population and other demographic characteristics would be similar in size a year before and after the heatwave.

“Comparison of daily counts for the extreme heat wave period compared with daily averages from the reference period yielded an excess of 1,353.5 deaths (a 42.88% increase)” (Azhar et al., 2014). Also, the results indicate that the mean maximum temperature for heatwave period was significantly higher than that of the reference period. To establish a relationship between the all cause deaths and monthly mean maximum temperature a correlation between them was found out which was highest for May 2010. Therefore, the study succeeded to provide evidence that heatwaves lead to increased mortality.

Temperatures are increasing and will continue to increase even if we stop emitting. This is because the greenhouse gases already pumped into the atmosphere will remain due to high residence time and lead to slow and gradual warming of Earth. Adaptation is the crucial strategy to reduce mortality due to heat waves (Ebi, 2006). Adaptation will help to improve living standards which will help to build up resilience of people and avert serious health consequences. The study by Saudamini Das has tried to bring into light the importance of awareness as an adaptation option to manage heatwave period. The DRM (Disaster Risk Management) program of Orissa identified heatwaves as one of the most important disasters.

The program thus focused to reduce vulnerability by making people aware regarding the dos and don’ts during the heatwave period, organizing heat warning systems and suggesting measure to avoid heatstroke. They also instructed the government to reduce exposure of workers during extremely warm temperatures, changing school timings and ensuring water availability. The program also gave special consideration to low income groups since the information was directly conveyed to them. The success of this adaptation option was evaluated by comparing the heatstroke deaths in the districts where the plan was implemented with those districts where no DRM program was operating. “The results in this paper are consistent with the view that heat wave awareness campaigns can significantly reduce heat stroke deaths during heat waves in a developing country context” (Das & Smith, 2012).

Nature has its own ways to warn mankind. If the voice of nature remains unheard it will lead us into unavoidable labyrinth of adverse situations, escaping which would be next to impossible. The current situation thus demands reduced level of emissions and adaptation to those stress situations that already exist.
References

1 A Heat Wave is a period of abnormally high temperatures, more than the normal maximum temperature that occurs during the summer season in the North-Western parts of India. Heat Waves typically occur between March and June, and in some rare cases even extend till July. The extreme temperatures and resultant atmospheric conditions adversely affect people living in these regions as they cause physiological stress, sometimes resulting in death. (National Disaster Management Authority)

2 Tipping Point: It is a threshold beyond which a system enters a state of disequilibrium and fails to revive back.

3 El Nino southern Oscillation : Seasonal variations in sea surface temperature of the Pacific Ocean which leads to climate fluctuations all over the globe

5 Normalized Difference Vegetation Index (NDVI): It is a parameter which helps to determine the density of greenery using Remote Sensing data.

6 SD: Standard deviation from the mean.