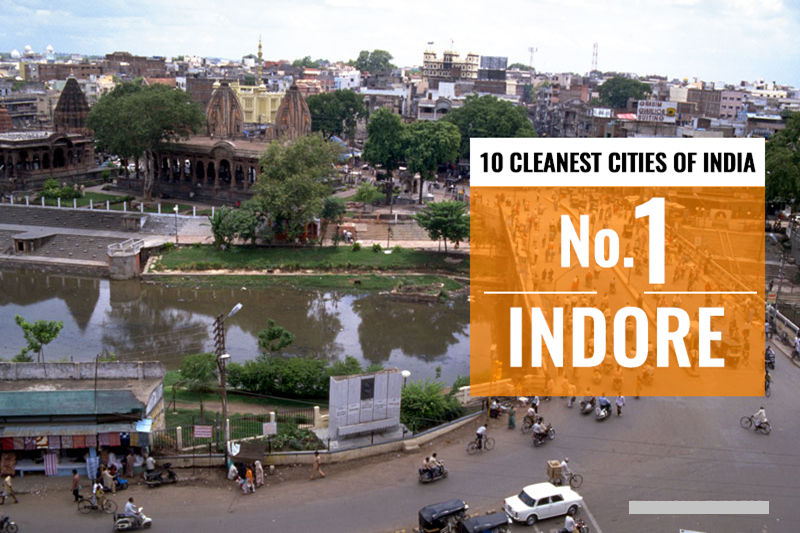 Indore together with Bhopal has been ranked as the top two cleanest cities for the second year running. Chandigarh has been positioned as the third cleanest city in the country. The first two have retained their positions in the listing. The results were thrown up by a sanitation survey conducted the by Housing and Urban Affairs Ministry. The list was announced Hardeep Singh Puri. The list has also graded National Capital New Delhi’s Municipal Council (NDMC) as being the cleanest city among the municipal bodies that have less than three lakh people, whereas the Greater Mumbai area has been ranked to be the cleanest among all the various state capitals.

The survey report says that Vijayawada is the cleanest among the big cities which have in excess of one million population. On the other hand, Mysuru (Mysore) has emerged once again as the cleanest among cities that have a population count of 3 lakh to 1 million. The Indian government also pointed out during Swachh Survekshan or the cleanliness survey around 37.66 lakh people gave feedback which covered 4203 municipal areas through the country. In the year 2017, only about 434 municipal areas, with 1 lakh or more population, were listed on various sanitation and hygiene parameters to find out the Cleanest Cities.

Cleanest cities of India as ranked by the government

“The onfield survey has been conducted by independent agency, and data for ranking of these cities have been collected from 3 sources: service-level progress, direct observation by random field visits; and the 3rd was citizen feedback,” says an official of the Housing and Urban Affairs Ministry.

A higher weightage of 35 percent has been allocated to the citizen feedback as they are ones who bear the brunt of pollution and unhygienic conditions. Taking a break from the past, this sanitation and hygiene survey has ranked at the national level as well as targeted those cities which have a population of less than 1 lakh and those were ranked at the zonal level, which included: North, South, East, West, and North East parts of India.