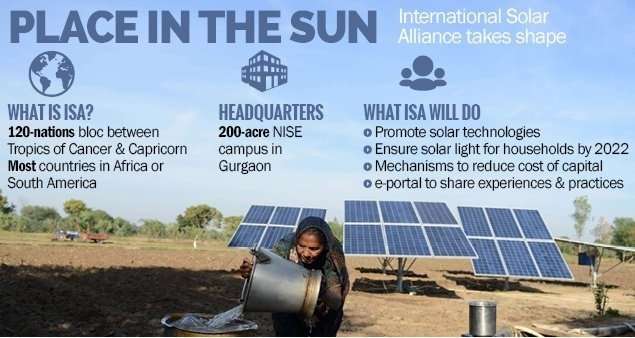 The first edition of the International Solar Alliance (or the ISA summit) was hosted at the Rashtrapati Bhavan, New Delhi, India (reflecting the prominence the country has come to acquire and that it is being viewed as a prime player as far as renewable energy, particularly solar energy, is concerned). India Prime Minister Narendra Modi and French President Emmanuel Macron co-hosted the event.

The International Solar Alliance is primarily a treaty, understanding, or an international inter-governmental alliance of 121 solar resource-rich countries that lie fully or partially between the Tropic of Cancer and the Tropic of Capricorn. The alliance’s objective is to promote the use of solar energy as well as reduce use of fossil fuels in countries which rich in sunshine.

During the Summit, Prime Minister Narendra Modi reiterated India’s resolve to generate 175 GW of electricity from renewable energy sources by the year 2022. As much as 100 GW of this expected output is to be contributed through solar power. As many as 23 heads of state, senior representatives of many countries, including deputy prime ministers as well as energy ministers attended the remarkable summit. Out of 121 potential countries, as many as 61 have joined the International Solar Alliance (ISA); while 32 nations have ratified the Framework Agreement.

There have been several initiatives in India to boost the adoption of green energy, particularly solar power. Recently, the largest solar power plant in Uttar Pradesh, the biggest state of India, has been inaugurated. The project will generate 100 MW for the state. The structure has 1,18,600 solar panels, which have been set up in more than 380 acres of land. The solar energy power plant will churn 15.6 crore units of electricity every year.

Put up in the Chhanvey block of Mirzapur District, the solar plant launch is in line with India’s pledge to generate 100 GW of solar power by 2022, which is being termed as the most ambitious renewable energy program in the world. The government aims to increase share of clean energy through its thrust on renewable sources of energy. India has put in place several green energy initiatives such as Solar Defence Scheme, Solar Roof Top Scheme, Solar scheme for CPUs, Solar Park, Solar PV power plants on Canal Bank and Canal Tops, Solar Rooftop, Solar Pump, etc. The developments have taken place over the past couple of years.