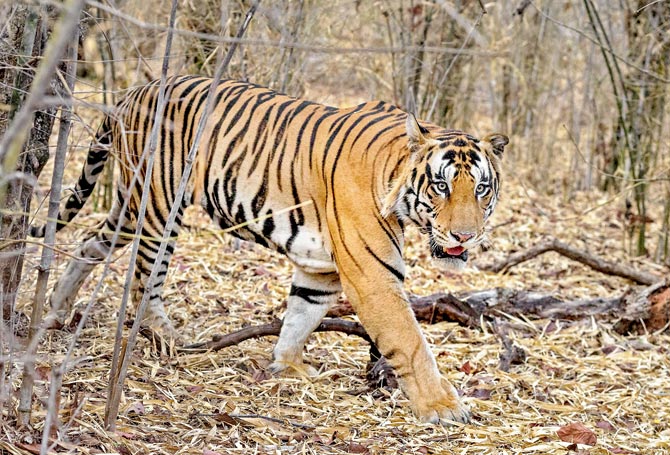 A leading animal and wildlife protection group has expressed dismay over the killing of the Lalgarh tiger spotted in Lalgarh in West Bengal, which was reportedly by local hunters who used spears, bows, and arrows to kill the cornered creature on 13 April. The Lalgarh tiger had been roaming a 30 sq km area of forests stretching across Jhargram, West Midnapore, and Bankura districts since 2 March, when it was spotted first. From drones to live traps and tranquilizing teams, forest officials tried different techniques to capture the animal but all efforts failed, leading to death of the tiger at the hands of local villagers who indulge in ritual hunting. The World Animal Protection organization has called this unfortunate.

It is, currently, a hunting season for tribals that leads to massive killing of all kinds of wild animals and has also seen the killing of India’s national animal that is protected under Schedule I of the Wildlife Protection Act. It has also come to light that several protocols laid by National Tiger Conservation Authority for tackling tigers in conflict situations were violated during the attempts to capture the tiger and the area in the vicinity of where the tiger was spotted was not adequately secured.

“We call upon the state government to involve experts from outside, in case they lack the requisite ability to humanely tackle conflict situations involving tigers and other species of endangered wildlife in Bengal. We reiterate our original request of humane and professional handling of all animals caught in conflict situations, effective coordination between all departments, enhanced sensitivity among the local populace for protecting wildlife and responsible media reporting to highlight the problems involved in human wildlife conflict situations, especially involving big cats,” said Gajender K Sharma, India Country Director, World Animal Protection.

World Animal Protection strongly urges a proper investigation into the death of this tiger at the hands of hunters and strict implementation of the Wildlife Protection Act with regards to any ritual practices that kill large numbers of wild animals.

“We urge the authorities to bring to book those responsible for killing the Lalgarh tiger and punish them along with those who failed in their duty to secure the safety of this migrant animal,” Gajender added further.

World Animal Protection welcomed the move to consider the areas covering Mahadayi, Mollem, Cotigao and Netravali–located in the Western Ghat region in Goa as part of a new Tiger Reserve as it would create more tiger reserves. The World Animal Protection group has also called for a comprehensive review of all aspects of the tiger habitat combined with capacity building for handling human–wildlife conflict situations as evidenced in the case of the Lalgarh tiger that was brutally killed.

The tiger is the National Animal of India. World Animal Protection has emphasized stringent implementation of all legislation to save the magnificent creature so that they roam free in Indian forests and wildlife.