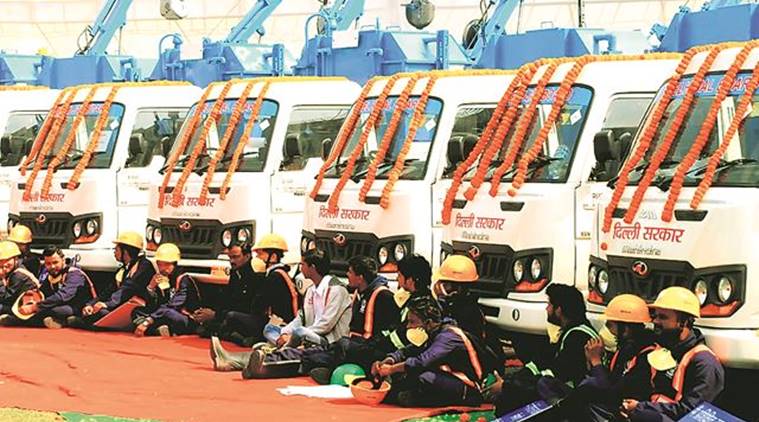 Manual scavenging is still practiced. It is a scourge in India. It is shameful that it continues to exist in this day and age. Politicians and government pay lip service to it without doing anything. This is despite the fact that we have so many innovations and inventions in technology. All this is set to change. In a heartening step towards ending the practice of manual scavenging in the national capital of Delhi, Chief Minister Arvind Kejriwal has introduced as many as 200 sewer cleaning machines.

The officials of Delhi Jal Board say that the machines were being provided to the particularly skilled manual scavengers and thus transforming them into ‘sani-entrepreneurs’.

‘It’s a historic day for capital Delhi to start such an initiative and ensure the safety and dignity of human life. The machines end the practice of sanitation workers entering manholes and septic tanks for cleaning,’ said Kejriwal. ‘We’ve developed the device to end the inhuman practice,’ he added.

Due to the caste system in India, most of the people involved in manual scavenging are from the Scheduled Castes or SCs. They are the most backward sections of Indian society. This is also quite painful. Rajendar Pal Gautam, who is the minister for SC-ST welfare, said that the Delhi government was committed to working for the uplift of Scheduled Castes in a better and effective manner.

CEO of DJB Anil Kumar Singh says that with the introduction of small sewage cleaning machine vehicles, it will be ensured that the cleaning of sewage in narrow lanes of Delhi is done properly. The machines can do jetting, grabbing hydraulic, and roding. It can clean manholes 30 feet deep. It can clean sewerage, bring the silt, slug and other waste in a trolley, Singh said.

This is a revolution for the uplift and rehab of sewerage workers through equipping them with sophisticated machines. This takes the war war against manual scavenging to a whole new level, Dinesh Mohania, who is the AAP MLA from Sangam Vihar has tweeted.