Paris climate accord: After Syria and Nicaragua, only USA left now 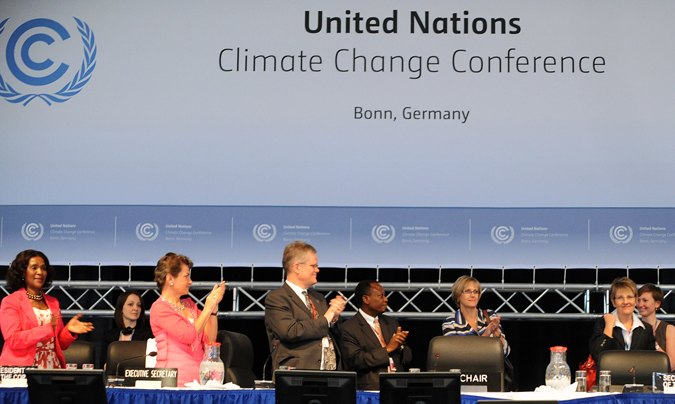 War troubled Syria has agreed to sign the Paris climate accord 2015. This will effectively leave out the United States of America as the only country on the Earth which does not want to join the treaty. A Syrian delegate came out with the announcement at the COP23 climate change summit being held in Bonn, Germany. Syria, Nicaragua, and the USA were the only countries left to sign the climate treaty. Nicaragua also recently announced joining the treaty. With both Syria and Nicaragua joining the Paris agreement, only the USA is left now outside the treaty.

Syria has been embroiled in a civil war which has resulted in more than 475,000 dead and has displaced 14 million people. The Syrian government was put under international sanctions. This made it difficult for the representatives of the country to participate in international climate talks. Now, Syria has sent out a clear message to the USA that fighting climate change is the need of the hour.

The talks, being organized by the United Nations, are underway in Bonn and are an effort to bring countries on one platform. The Bonn COP23 climate talks aims to figure out ways and means to help the signatory countries implement their pledges regarding emissions cuts. The Bonn climate change conference is also looking into how the process can be expedited and followed faster and aggressively.

The COP23 Bonn is a realization of the Paris Climate Accord: a historical event in the fight against climate change. Now, 197 countries have come together to prevent global temperatures from increasing by over 2 degree Celsius (3.6 degree Fahrenheit). The Paris agreement 2015 is aimed at cutting greenhouse gas emissions and fight environment issues such as global warming and climate change. The COP23 Bonn talks will ensure that nations meet their commitments on emissions. Diplomats from across the world are meeting at Bonn, Germany to monitor the progress made and forge a blueprint for the way forward. The meetings of Bonn climate change conference, being held in continuation with the Paris climate accord, will go on till November 17.

Paris climate accord: USA at the epicenter of COP23 Bonn climate talks

Efforts at curbing global warming were set back after Donald Trump assumed Presidency of the United States. In June 2017, Trump announced pulling the country out of the Paris climate accord. He says the Paris climate accord is disadvantageous to his country. There has been an international outcry against his decision. Moreover, climate change reports coming out of the USA are themselves contradicting Trump’s claims.

According to a study by the US government, climate change has cost the country $350 billion. It says wildfires, hurricanes, floods, and other such extreme weather events are costing America billions of dollars. The Government Accountability Office (GAO) study says the government spent $350 billion on disaster relief as well as assistance programs. The study also warns economic damage could increase as global warming becomes magnified and intense.