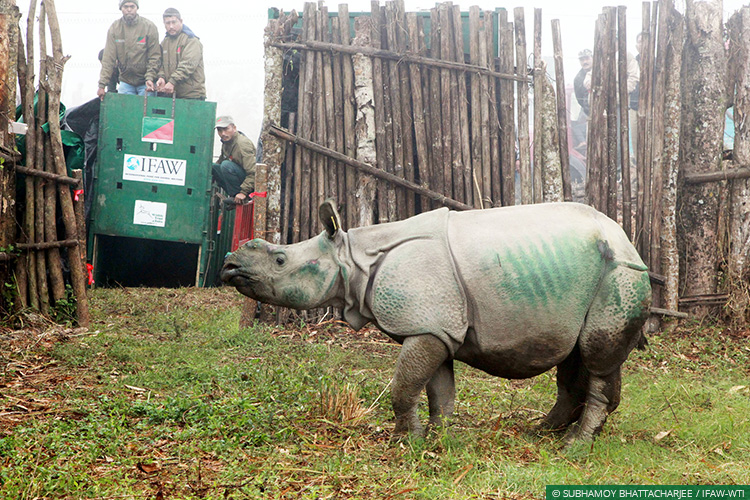 Within three days, two female rhinos and a calf were shot dead at the Kaziranga National Park in upper Assam. Poachers removed their horns. The rhino as well as the calf were killed close to Tunekati Forest Camp, Burapahar Range. Despite the security personnel launching a search operation after hearing the firing shots close to midnight, the poachers managed to flee leaving behind bullet-ridden bodies of the rhinos.

Many empty cartridges of AK-47 rifle were also found at the spot. This year, five rhinos have been killed in Kaziranga. Earlier, poachers killed two rhinos. As many as 18 were killed in the park past year due to rhino poaching. These rhino poaching facts are startling.

Despite all kinds of visits by politicians as well as highly placed officials, nothing seems to change in the dark territory of Assam’s poaching grounds. Kaziranga is Assam’s premier national park. It is a UNESCO world heritage site and is the only place where the Indian one-horned rhino is found. Every year poaching is rampant. Although several poachers keep getting killed and a few are arrested also, conviction rates have been abysmal in poaching cases. Little has changed on the ground.

Rhino poaching is a major environmental crisis in Assam, India

Rhino poaching is a major environmental issue in Assam, India. Poaching is rampant in Kaziranga National Park or Manas National Park and other such grasslands. The one-horned rhino or the Indian rhino survives only in the Northeast of India.

Kaziranga National Park, Orang National Park in Darrang district, and Pobitora in Marigaon account for 95 per cent of the total wild one-horned rhino in the world. They roam around the floodplains of Indogangetic as well as Brahmaputra riverine tracts and neighboring foothills.

Demand for rhinoceros horn continues to be high as the illegal trade is lucrative. A game-changing exercise has to be undertaken to ensure they don’t become extinct species and become a relic of the past. Rhinoceros is poached for its horn which finds use in traditional Asian medicine. A few other parts such as nails and skins also hold high value.

Save vulnerable species of one-horned rhino before it becomes extinct

Kaziranga is home to about 2500 one-horned rhinos. This is the world’s largest population of rhinos, which has been listed as vulnerable. The killings are particularly worrisome as they come at a time when the Kaziranga park was making substantial progress in curbing rhino horn poaching. There is more bad news: this year has seen record rhino poaching in Africa, which is a threat for rhino population in the world.

Urmi Bhattacharjee has worked with several mainstream media houses such as NDTV and others. She is a committed environmentalist and feels very connected to nature. The Northeast Woman Journo has been conferred with the Prestigious Red Ink award. You can reach her at urmi.bh@gmail.com