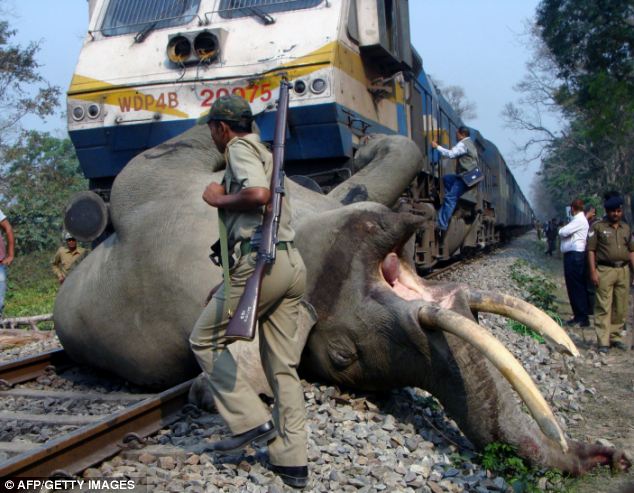 In what is worrisome news for wildlife conservation, groups of elephant continue to get killed in random incidents. In one such tragic incident, 5 wild elephants got killed in the wee hours of Sunday when a train hit them near a tea garden in the Sonitpur district. One of the elephants was pregnant and its dead calf had to be extracted. Such cases of human animal conflict are increasing in India’s state of Assam and have been a grave cause of concern for wildlife bodies as well as conservation lovers. In the event of the large scale deforestation and construction of villages and railway tracks in the area, pachyderms have lost natural habitats and are often found straying on paths that are prone to dangers such as these.

The tragic episode happened at the Bamgaon Tea Estate under the Chariduar police station area close to Balipara at 1.30 am, say forest officials. The Guwahati–Naharlagun Intercity Express hit the elephant herd as it was crossing railway tracks, said chief conservator of forest (northern range) P Shiv Kumar. Four female elephants as well as a male jumbo died then and there, he added. The unborn elephant calf came out of its mother’s belly after the huge impact, said Kumar. He added that forest officials were looking to locate the other two elephants that were part of the herd. The dead elephants underwent the post-mortem examination.

Wild elephants usually come out of the Nameri National Park looking for food. In the past couple of days, a group of 70 elephants have reportedly strayed into the area which is accident prone due to its proximity to the railway tracks. The Assam Environmental NGOs Forum has communicated grief over the incident and blamed it on the lack of foresight with respect to planning of development activities.

Wildlife conservators have termed the incident a shame for a state such as Assam where around 40 elephants have been killed or died unnaturally in the past 100 days. Wildlife activist Pranoy Bordoloi said to the media that the putting up of railway tracks across well-known animal corridors has led to the killing of around 225 elephants from the year 2006.

Jayanta Kumar Das, ex wildlife warden of Kaziranga National Park, says that handing over forest lands for such development was a recipe for disaster and invariably led to tragic incidents. Das has demanded intervention of Assam government to prevent them. Rituraj Phukan, Green Guard Nature Organization, requested the Assam Forest Department as well as the North Frontier Railways to provide lighting on the tracks like those done on highways as well as install warning systems and also ensure speed limits for trains in the vicinity.

Being a Schedule I species, the elephant has been accorded the greatest protection by India’s Wildlife Protection Act (WPA) of 1972. “Asian elephants of Assam” have been categorized as “endangered” by the International Union for Conservation of Nature (IUCN). According to the last elephant census done in India, there were a total of 5,620 pachyderms in 2011.

Wildlife has been at the receiving end in the event of untamed development and human-animal conflict. Just some time back, a number of rhinos were shot dead at the Kaziranga National Park in upper Assam, with their horns removed. Poaching has been a big environmental issue in Assam, India and is rampant in the Kaziranga National Park and Manas National Park, particularly for the one-horned rhino or the Indian rhino which is now found only in the Northeast of India.