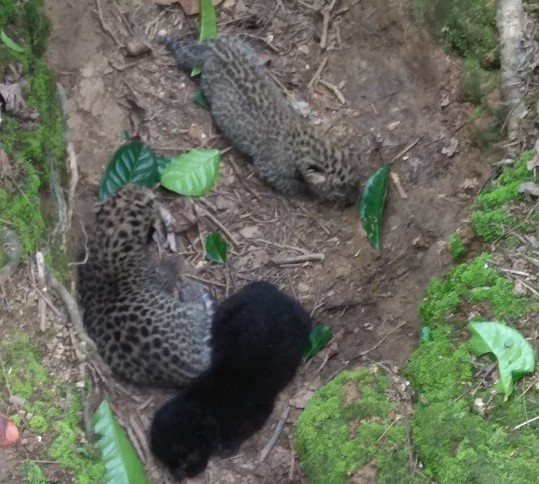 Three leopard cubs which were found by tea garden workers have been safely reunited with their mother. This was done by isolating the area and providing the mother undisturbed access at Rangagora Tea Estate, Tinsukia. This is a truly heart-warming story of the lost and found reunion of 3 leopard cubs with their mother, which played out at Rangagora Tea Estate on 12–13 May, 2018. The reunion was orchestrated through the Wildlife Trust of India’s (WTI) Mobile Veterinary Service Eastern Assam (MVS-EA) team, which is attached to the Centre for Wildlife Rehabilitation and Conservation (CWRC) and IFAW-WTI. They joined forces with the Assam Forest Department’s wildlife rescue, treatment, and rehabilitation facility near the Kaziranga National Park.

The retrieval of the cubs, which are fewer than 2 weeks old, was initiated when the MVS-EA team received a call on 12 May that 3 cubs were spotted inside a trench in the Rangagora Tea Estate. They were spotted by the tea garden workers, who were carrying out their regular activities. The workers also said that they’d regularly been observing an adult leopard in the region, which is now presumed to be the mother leopard.

A team led by Dr Santosh Kumar Gupta, Veterinary Surgeon, WTI, MVS-EA rushed to the spot and isolated the area and restricted people movement in order to provide the mother, which was presumed to be in the vicinity, the chance to get back her cubs and thus to be able to move them to a safe place. The Assam Forest Department staff, together with locals and villagers, monitored the entrance gate of the tea garden in order to ensure crowd control and to keep away the sea of onlookers.

People thronged from the nearby areas to catch a glimpse of the leopard cubs so that they could click photographs. The area was isolated after noon and the IFAW- WTI and MVS-EA team waited to allow the mother to get her cubs. After 5 hours, the team visited the spot and found only one cub left. This indicated that the mother was picking up her cubs, evident from the fresh pug marks of an adult leopard. Knowing that the leopard would prefer darkness to complete the retrieval and that she may abandon the cub if she was disturbed by visitors, the team isolated the area from human disturbance and returned the next morning only in order to check the status.

IFAW-WTI MVS Veterinarian Dr Santosh Kumar Gupta played a key role in protecting the lives of the leopard cubs. He says: “The successful reunion of cubs with the mother has taught us that unnecessary rescue of such cubs’ from tea garden is not suggested for any feline species, if sighted by people. We should provide opportunity to the mother leopard before any rescue attempt, who generally comes to take her cubs to a safer place. In this case, we are thankful to workers and management of Rangagora Tea Estate for their support for reunion of cubs and the mother.”
On 13th May 2018, while world is celebrating Mother’s Day, the finding of fresh pug marks of an adult leopard evidently proved that the mother leopard had picked up the babies on repeated intervals from the site making her happy too. The IFAW-WTI MVS-EA team was further relieved when a few locals reported sighting of the mother leopard taking the cubs to a different area of the tea garden which was safer and more isolated, thus bringing to close an ordeal with a happy ending.