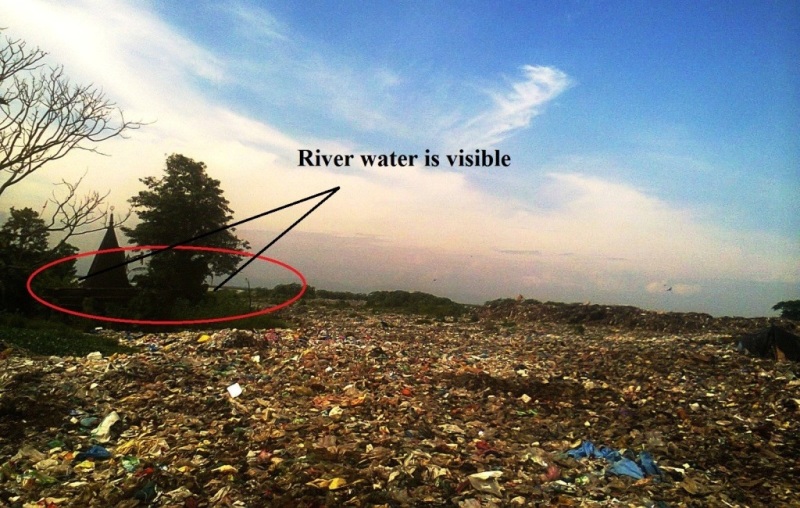 In a comparative study, it has been noticed that all the towns in Assam have problems in terms of municipal waste management but among them Dibrugarh town is more critical due to open air dumping system since 25 years on the banks of the river Brahmaputra dike area known as Maizan. It is an unsuitable and unscientific area for dumping process and is dangerous both for human health and riparian ecosystem as the site is zero meters away from the River Brahmaputra and the dumped wastes directly mix with river water very easily through water runoff process.

Jorhat Town is also facing serious problem with dumping site which requires serious monitoring and amendments in waste management methods. Comparatively, Tezpur town is better as it possess a recycling unit and has already adopted integrated municipal waste management. The study also recommended that Solid Waste Resource Management (SLRM) system be introduced in all the three municipalities covered during the scope of the waste disposal study. The report says that door to door collection of garbage, segregation of dry and wet waste at source, waste disposal, sorting of different components according to waste resource management, selling of the separate waste categories and ultimately generating revenues for door to door waste collection should be introduced immediately. Constant awareness programmes in the different municipal wards and engagement of people is required to ensure ownership and sustainability of the process.

Waste disposal in open sites and rivers in Upper Assam

Tezpur Municipal Board has a dumping site which is far from the municipal area known as Balichapori, Mouza Mohabhairab having Dag No. 90, 92, 93 which is meant for the construction of Solid Waste Management Project of Tezpur town, the project started on February 4, 2010. There is one recycling unit for organic waste and used these recycled products as manure. The site is found with boundary wall in all side though the area is having settlement but the unit having one in charge personal and some other workers for look after the situation and coming vehicles with waste from town. The urban local body has used RCC bins and metallic containers to store the wastes and 132 numbers of workers were engaged to handle the waste management task. The sweeping crew collects the wastes from road sides and deposit in the nearby community bins by using tricycles.

Jorhat Municipality used to collect the Garbage from collection point/ dustbin since morning 6 AM and dispose the same at Garamur Dumping Ground, 3 km away from the city. Location of dumping ground is inside of municipal area which is surrounded by heavy settlement and the place is known as Gomukh Sasan. There is around 6-7 Khatas of land for open waste dumping which directly affecting surrounding area as one market is there in adjacent of dump yard along with Sasan Ghat of Jorhat Town, the yard is not having any boundary and directly closer to Sasan and inhabiting area. As during the field visit local resident told they need to face problem for the burring of waste and odor that come out from waste there also a problem of rodent and carnivorous birds that attracted by waste and make the area unhealthy. However, manpower support is lacking.

Dibrugarh Municipal Board dumps the waste of the entire town in an open dumping area known as Maizan, located at Barsikiya Gaon a village, which is situated in 27°30’1.50″N and 94°55’59.41″E.The open dumping ground is located near the river. This location is totally unscientific as the dumped wastes directly mix with river water through water runoff process. This leads to pollution of river water from both point and non-point sources. Continued inaction affects not only the river water ecosystem but also the water quality of the river. Many communities living along the length of the river are totally dependent on the Brahmaputra for drinking purpose and all other requirements, including source of irrigation, domestic usage, and animal husbandry. Rivers therefore continue to remain the lifeline for people living upstream and downstream of areas which have become dumping grounds.

Unplanned, unscientific dumping of solid waste results in contamination of ground water systems besides affecting surface water sources. The survey and field visit to the dumping area of DMB revealed the following.

Findings of the Voice of Environment (VoE) study 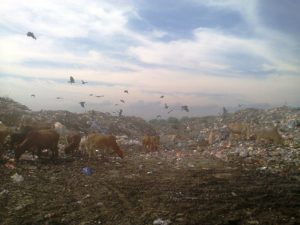 • It has been noticed and observed that, Waste disposal and dumping site condition is very poor and the site is full of many rodents, birds, flies, animals like pig, cow, dog etc.

• The area is very unhealthy and unhygienic, waste quantity in dumping yard is increasing day by day as per local residents of nearby the site.

• Solid wastes composed of rags, stones, soils, besides food and vegetable waste from kitchen and market etc. even dead animal too.

• Heaps of refuse present at site is causing an unsightly appearance and nuisances from bad odors effecting surrounding area. There is no practice of segregation of waste as biodegradable and non-biodegradable except few households of all the towns as the segregation carries no meaning as there is no separate dumping spot or waste collection system.

The study tries to find solutions too to Waste disposal through a comparative analysis of the complex and intricate urban issues in three upcoming townscapes of Assam which is also regarded as the gateway to North East India and is considered a very important urban centre of good governance and global trade in India. Public as well as administrative cooperation and participation can change the scenario which can bring a better clean environment for all.

It is estimated that the population of India would increase from 1029 million to 1400 million during the year 2001–2028, by 42% at the rate of 5.2% annually. The estimated rate of urbanization of India has increased from 26.5% to 38% in the last 50-60 years and which is expected to rise unto 44% by the year 2026. It is an interesting fact that, in India there is sharp increase in the numbers of metro cities from 23 to 35 in the last few years. The population in Class I cities (metropolitan cities), urban centers and metro cities is having a population of more than 1 million. This conglomeration of urban centers is generating Municipal Solid Waste estimated to 1.3 billion tones every year, and expected to increase up to 2.2 billion tones by. In most of the developing countries, municipal solid waste disposal has been a chronic problem, particularly in areas with high population density, high production of refuse, and scarcity of land adequate for landfills with scientific measures.

Moharana Choudhury, Researcher cum Environmentalist from Guwahati, Assam, India and Joystu Dutta, Assistant professor, Department of Environmental Science, Sarguja University, Chhattisgarh, India did the research study with support from organization Voice of Environment which, is working for a mission “Clean Green Assam” vision so far. During this study collection of secondary data’s from the municipality boards, Government departments as town and country planning office, revenue office, agriculture department, field visit observation, social survey of towns, interviews with officials and staffs of waste management unit of respective municipal boards, citizens of towns etc. Secondary data collected from Municipal boards to assess the present urban solid waste management scenario of the towns of upper Assam, some photographs also taken from the different part of towns at the time of survey along with dumping ground and surrounding areas. This comparative study was done for Tezpur, Jorhat, and Dibrugarh town of Upper Assam, India. Where Tezpur is considered as ‘Cultural Capital of Assam’ and has also earned the Clean City status earlier. Dibrugarh is known as ‘Tea centre of India’ and industrial town of Assam. Jorhat town is situated at the Southern bank of mighty river Brahmaputra. The world’s oldest and largest Tea research institute is located at Jorhat.

By Voice of Environment

About Voice of Environment

Voice of Environment: The organisation Voice of Environment(VoE) is dedicated to Environment, People and Mother Earth for clean green and sustainable Environment. Motto: “Raise our voice for better Mother Earth”. To focus on the overall development of the Urban/Rural people in particularly with sustainable development. To ensure better Health, sanitation for all citizen so that a meaningful and healthy life is ensured to every citizen. To conserve biodiversity and natural resources of the India as well as entire world. To promote Research and Development in the field of Environmental Management, Environment Education for better future. To encourage and promote Environmental studies in the country and spread awareness for Environmental conservation to the entire world. The Organization is working for sustainable development in partnerships between Civil Organization (Local Community, NGOs, Academic Institutions, Private Enterprises/Businesses) and Government Departments of Environment, Biodiversity, Ecology, Forestry, Health, Safety, Sanitation, Education, Science, Technology, Research & Development etc.