Climate Change Impact: Factors And Their Impact On Fish Germplasm

Germplasm is a complete set of genetic material transmitted to offspring through germ cell. Germplasm is very important for the maintenance of biological diversity and food security. Climate change impact refers to a change in the average and/or variability of the climate system due to variation in solar radiations, volcanic eruption, plate tectonic, excessive use of fossil fuels and deforestation. Climate change causes an increase in Earth’s temperature and can have severe effects on population structure, species composition, migration pattern, and reproduction.

Most of the planet is covered by water which constitutes 97.5% sea water and only 2.5% freshwater. Moreover, most of the freshwater is locked in polar ice caps (69%), stored in underground aquifers (30%), river and lakes (0.3%) or included as soil moisture, swamp water (0.9%).

Germplasm is tissues, organs, and organisms which determine variation contained in genetic material (genes, groups of genes, chromosomes) and also control heredity. Germplasm is mainly maintained for the purpose of animal and plant breeding, preservation, and other research uses. Germplasm is also preserved in a form of seed collections including seed banks, nurseries, animal breeding lines, animal breeding programs or gene banks, etc. Germplasm range from collections of wild species to domesticated breeding lines that have experience extensive human selection. Germplasm collection is very important for the maintenance of biological diversity and food security.

Climate change also called global warming refers to a change in the average and variability of the climate system includes the atmosphere, the water cycle, the land surface, ice, average surface temperatures and living components of the earth and it lasts for an extended period (i.e., decades to millions of years). It has remarkable influence on biodiversity and ecosystems that causes changes in species distributions, population sizes, the timing of reproduction or migration events, and an increase in the frequency of pest and disease outbreaks.

Sun always produces energy in the form of electromagnetic waves, including visible and ultraviolet light and infrared radiation refers to solar radiation. When solar radiation falls on earth that produces various phenomenon owing to atmospheric effects, including absorption and scattering, local variations in the atmosphere, such as water vapor, clouds, and pollution latitude in different location, seasonal variation in the year, time variation in a day.

: volcano occurs and emits a large amount of sulfur dioxide (SO2), water vapor, dust, and ash into the atmosphere. The gases and dust particles reach the upper levels of the atmosphere (called the stratosphere) and partially block the incoming rays of the sun, leading to cooling. Sulfur dioxide combines with water to form tiny droplets of sulphuric acid. it takes a form of acid rain affects the biodiversity.

: Plate tectonics refers to vertical and horizontal displacements. It alters ocean currents and therefore heats transport, global atmospheric circulation, more glaciers over land, higher albedo, and cooler temps. It also generates more volcanic activity. Hence, when the plates are on the move, have more volcanic eruptions increases more CO2 into the atmosphere this would cause global temps to rise. If there is little movement, volcanic activity decreases. So, CO2 concentrations are lower in the atmosphere as a results average temperature decreases.

Climate change contributes to the proliferation of greenhouse gases that causes an increase in Earth’s temperature and can have severe effects. The earth’s average temperature has move 1.4° F over the past century and is presumed to increase as much as 11.5° F over the next.

Polar ice caps are melting continuously due to the overall increase in global temperature, and this melting can have serious consequences for all organisms on Earth. It makes ocean water less saline. This can cause problems for organisms that are well adapted to the very salty ocean waters. The polar ice caps help to keep the Earth a nice temperature, but the melting of polar ice caps increases the rate of global warming. Polar ice caps provide food and shelter to small plants, invertebrates, and animals. This leads to extinction of many of these species because they are well adapted to the climate and resources in these regions.

A warmer atmosphere can hold more moisture, and increases water vapor 7% by an increase of every centigrade of temperature. This could lead to prolonged aridity and a greater risk of floods.

Climate change can result in species forced to move elsewhere to find suitable places to live and food to eat. Impacts on individual species indicate wider changes at the food chain level that will potentially change conditions for many species. Hence, affecting the overall ecosystem.

The timing of reproduction: Climate changes cause changes in period, the amplitude of reproduction that leads to phase-shifting of spawning to complete inhibition of reproduction. It has various indirect effects on the embryonic duration and egg survival, size at hatching, developmental rate, pelagic larval duration and ocean acidification,

This in turn impacts on population replenishment and connectivity patterns of fishes
Increase in the frequency of pest and disease outbreaks: Increasing water temperatures shift the balance of host or pathogen. Hence, increases the frequency and distribution of disease. For example, A number of endemic diseases of salmonids (e.g. enteric red mouth, furunculosis, proliferative kidney disease, and white spot) will become more prevalent and difficult to control as water temperatures increase. 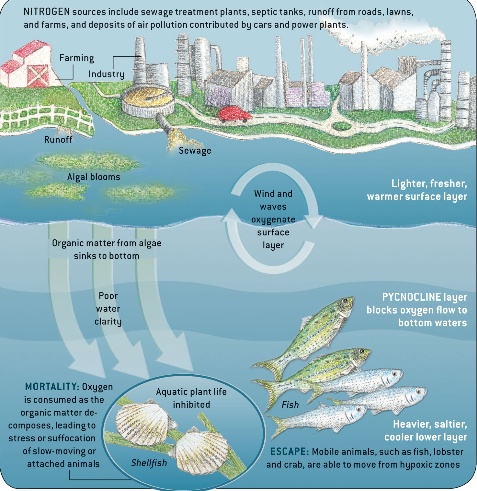 The present investigation of the study pointed out that both natural phenomenons, as well as anthropogenic activities, are responsible for climate change. It causes a major impact on the ecosystem leading to changes in sea levels, altering the population structure of species, reproduction, migration pattern, susceptibility to diseases.