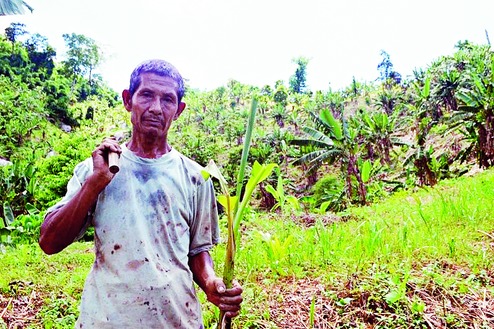 Sustainable farming is a necessity for today in order to protect the environment. Farmers in Adokgre and adjoining areas in North Garo Hills of Meghalaya, India, have adopted banana cultivation as a viable alternative to jhum, which means shifting cultivation, for sustenance. Jhum is prevalent in several parts of the Northeast region of India. As per this practice, forest area is cleared in order to carry out agriculture. The Adokgre village and adjoining Goalpara district in Assam have become popular destinations for banana cultivation. Almost all households in Adokgre, both in the plains as well as in the hills, have been depending on banana cultivation for several generations. Farmers say jhum led to destruction of forest land as well as its pristine ecology. They had to switch to banana cultivation in order to protect forest land as well as rejuvenate green cover. This will also be beneficial for the environment and biodiversity.

“We partnered with a government organization to plant trees in the area that lost green cover,” says Beckingson Sangma, a 60 year old farmer, who left jhum and now grows bananas. During peak of insurgency, militants overpowered forest department officials and started to cut trees illegally, he says. ‘Militants came armed, cut down trees, and sold them to timber smugglers in Assam.’

The destruction can be evidenced from the barren patches in the Ildek Forest Reserve. Officials say the forest cover of Meghalaya reduced from 69.06 percent to 63.06 percent over the last 15 years. Most parts of the forest cover reduced due to population pressure, conversion of forest land into agricultural fields, urbanization, deforestation, as well as mining, they say. Farmers of Adokgre have been into banana cultivation for ages. It received impetus five years ago, when people abandoned jhum cultivation.

‘I left jhum after I realized it posed a threat to environment. As sustainable income, I have started banana cultivation on 8 acres of land,’ says Beckingson.

Beckingson started banana cultivation in 2014 in a big way and now earns Rs. 10,000 per month. During the peak seasons (September to November), he earns Rs. 25,000 a month. For several farmers, banana cultivation yields better returns and results in economic stability as well as sustainable farming. Farmers of the area are increasing their land in order to plant other cash crops such as betel nut, pepper, jackfruit, and oranges. Farmers, who receive very little help from government agencies, sell their farm produce at the Adokgre weekly market (the biggest banana market in Garo hills as well as the Daranggre market in Assam’s Goalpara, which is the largest banana retail hub across Asia).

‘Farmers have realized we need to conserve forests. We lost forest cover due to the jhum cultivation. Farmers are getting back to roots to conserve green cover,’ says Charles Sangma, who is an advisor of the Adokgre banana market.

Charles encourages farmers to increase banana plantation. ‘I invite traders from Bengal and Bihar to the market. Every Saturday we sell 3 to 4 rucks of banana from Adokgre and adjoining villages,’ he adds. He also admits the demand of Adokgre bananas is huge as it’s organic. ‘Our farmers don’t use pesticides or fertilizers,’ he says confidently.

Sardan Sah came to Adokgre from Siwan (Bihar) 40 years ago, and started buying and selling banana in the Guwahati market. Over time, he expanded the business, and started his company: National Fruit Company. Sah buys bananas from Adokgre weekly, and then sells them at Daranggre.

‘I made a living from growing bananas of the Garo hills. I enjoy a cordial relationship with farmers. It’s an interdependent industry. We carry forward the business, keeping in mind everybody’s interests,’ says Sah.

Farmers fix rates of produce depending on availability. At the weekly market, a truck, full of unripe banana, is sold for Rs. 1 lakh to Rs. 1.8 lakh, depending on variety and quality.

A study, published in Climate Change and Food Systems: Global Assessments and Implications for Food Security and Trade, said that, by 2070, land areas suitable for bananas would increase by 50 percent. Increasing annual temperatures will make conditions favorable for banana cultivation in subtropics as well as in the tropical highlands. With sustainable farming, the Garo hills region can reap the benefits and do its bit in order to combat climate change along with food security.