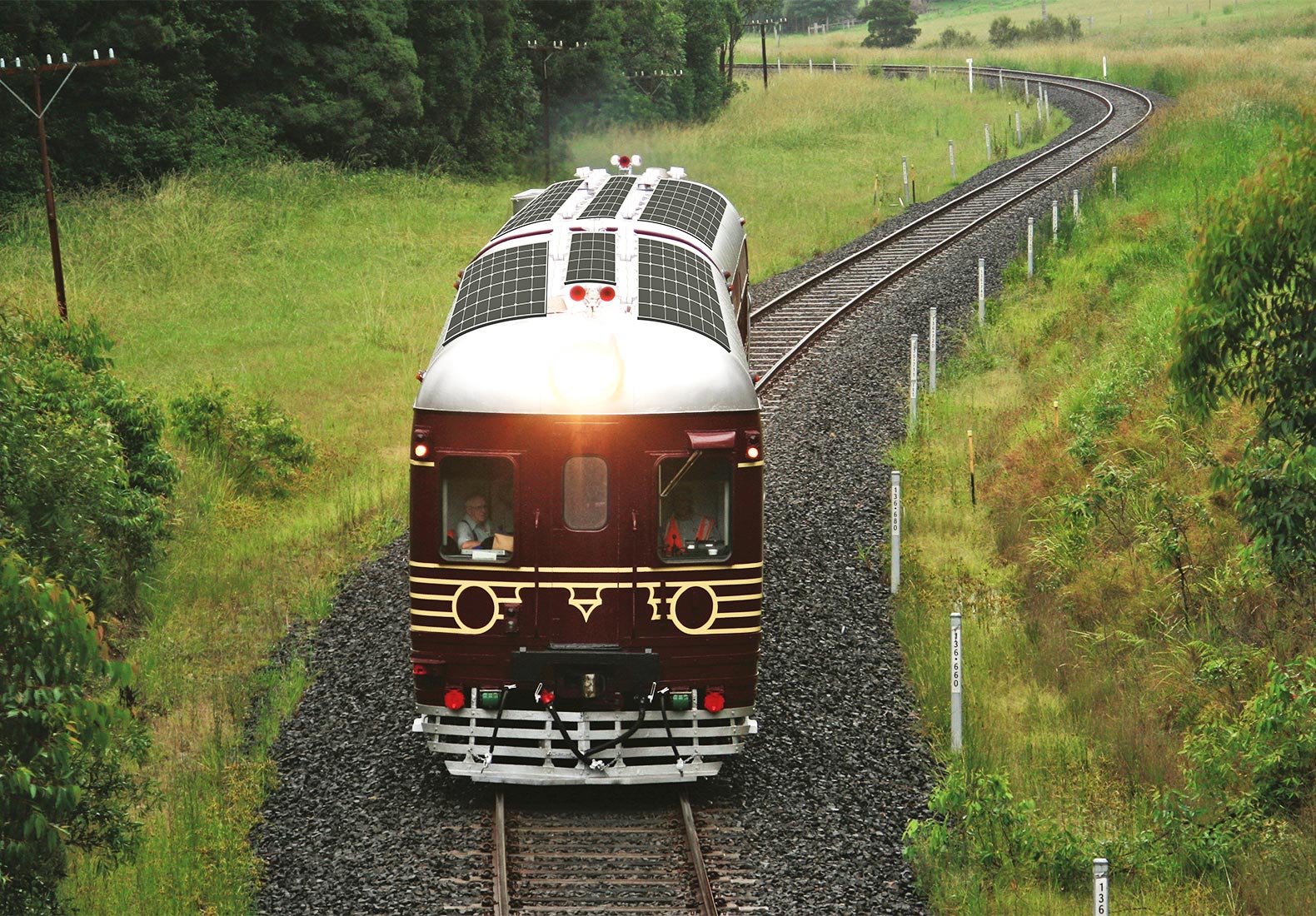 Solar power trains are closer to realization as the technology evolves and matures. The world’s first solar power train has been launched in Byron Bay, a northern New South Wales coastal town of Australia. Leaving the platform with around 100 passengers on board, the green train made its trip on 16 December 2017. The refurbished railway train ran on a 3 km stretch of a disused rail line at the popular Australian tourist destination of Byron Bay. The train was last used in 2004 and ran on the 110-year-old tracks.

The first 100 percent solar power train’s lighting, control circuits, traction power, and air compressors are all battery-powered. The Byron Bay Railroad Company refurbished the 3 km stretch of railway tracks and restored the heritage train, fitting it with a 6.5 kW solar array with flexible solar panels. The solar panels lining the carriage roofs produce energy that is stored in a 77 kWh battery system, which can also charge up between trips via a 30 kW solar array at the main station. The battery bank has around the same capacity as a Tesla Model S and can make 12 to 15 runs off one charge as it only takes the solar train around 4 kWh for each leg of the trip.

‘We had been thinking about it, but finally technology caught up and it made it feasible,’ says Jeremy Holmes.

A regenerative braking system ‘recovers 25 percent of the spent energy each time the brakes are applied.’

The interesting technological development is the realization of an 8-year-old dream of the owners of a local resort (Elements of Byron) as well as their development director Jeremy Holmes. It is being run as a not-for-profit entity. The restored train carries passengers between North Beach Station and the Byron Bay town.

The solar ride costs $3 one-way for the 3 km trip which takes 7 minutes. The solar train essentially allows resort guests and other passengers to avoid the Byron town traffic. Apart from the room for 100 seated passengers, the solar power train has space for luggage as well as people standing. The innovative project took 8 years of efforts.

The solar power train weighs 70 ton and its solar power panels on the roof charge a large lithium battery. At the train station at North Beach, there is a 30 kw solar system too, which is used to top up the train with the extra power after every 4 to 5 trips.

‘We have got a regenerative brake, which means we can re-gather energy when we brake to use to accelerate,’ says Holmes.

The solar power train also has a diesel engine for emergency back-up, just in case the day is overcast or if there is an electrical fault.

Besides the Elements of Byron business, the area is a tourist place and boasts of facilities such as shops, cafes, pub, along with residences. A small business hub is also coming up. A scheduled stop is also being considered along the route at the Discovery Park between the resort and Byron township. The solar train will run on a limited timetable in January before it starts full service.