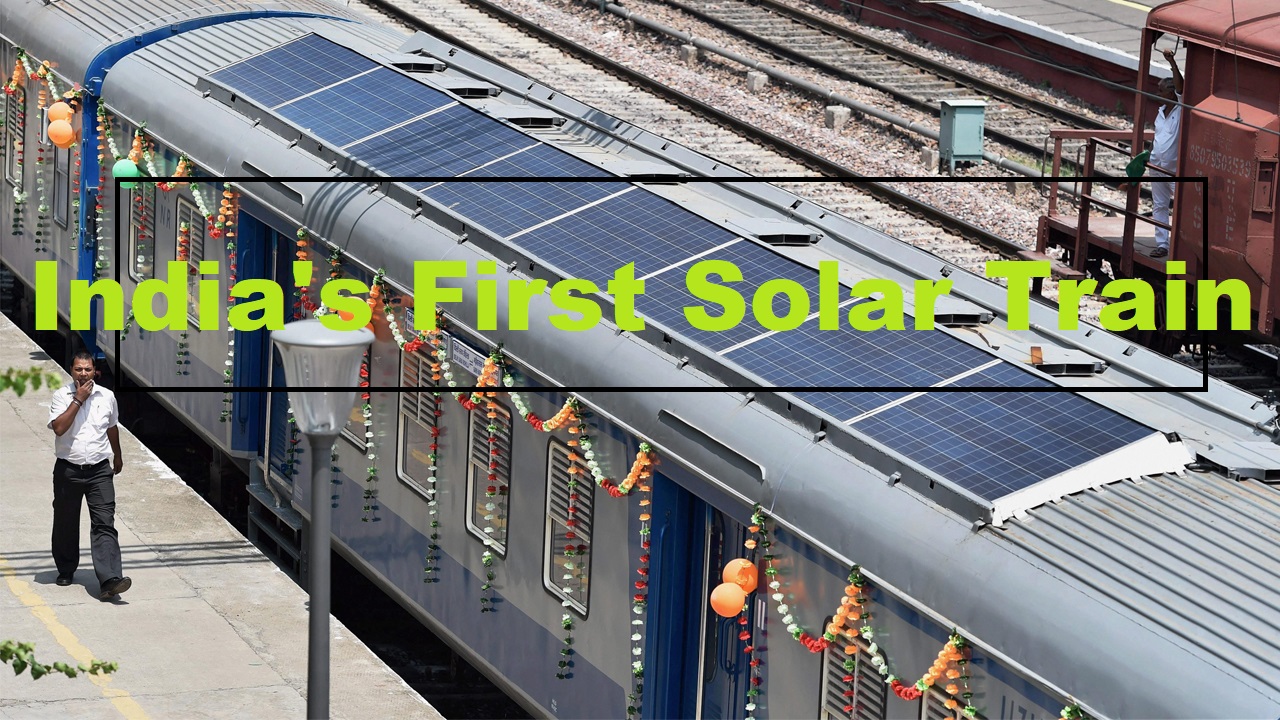 Indian Railways has started its first solar-powered train. The solar power train has a battery bank to ensure power if there is no sunlight or under cloudy conditions. Power requirements of the coaches, such as lights, fans, as well as the information display system is met through the energy stored by solar power panels, which are mounted on top of the coaches of this diesel electric multiple unit (DEMU) train. The development aims to reduce air pollution in India.

India is facing an environmental crisis. Despite measures to control pollution, there has been no reduction in air pollution levels. Particulate matter keeps increasing. Delhi Smog is a grim reminder which keeps on happening with alarming regularity every year. It is a reality check of the kind of pollution that exists in India’s cities. Air quality dangerously reduces to hazardous levels. According to a World Health Organization (WHO) study, national capital Delhi ranks as the most polluted. Air pollution at times has been 40 fold more than the permissible safety limits prescribed by the WHO.

The train was inaugurated at the Safdarjung railway station in Delhi. Union Minister for Railways, Suresh Prabhu, who launched the train, says this development is a ‘path-breaking leap’ in making Indian trains environment friendly. The minister said it was a reflection of Indian Railways’ commitment to be eco-friendly. The department, it seems, is trying to cut its massive carbon footprint as well as use cleaner fuel. This should act as an impetus to the use of non-conventional or alternative sources of energy.

DEMU trains are run by a multiple-unit powered by onboard engines. They don’t need a separate locomotive. The power requirements of passengers, such as lights, fans, etc., are met through a diesel generator. Indian Railways has been taking other environment friendly steps too like bio-toilets, water-recycling, waste disposal, CNG/LNG, and harnessing wind energy.

Solar power train will save Rs. 12 lakh every year

The solar power train has been manufactured at the Integral Coach Factory (ICF), Chennai. The solar panels have been fitted as well as developed by the Indian Railways Organization of Alternative Fuel (IROAF). About 24 more coaches are being fitted with the green power system. A smart inverter in the system optimizes power generation to cater to the load during night hours. This is carried out with the aid of a battery bank to ensure electricity in the solar power train.

The system reduces diesel consumption and thus the carbon footprint by reducing carbon dioxide generation by 9 tons per coach every year. Indian Railways claims that a solar power train with 6 coaches saves about 21,000 liters of diesel, effectively saving Rs 12 lakh every year.

Environment friendly policies and renewable energy economics can help transform the outlook of the sector in India. According to a report by Ernst and Young (EY), India has moved up the Renewable Energy Country Attractiveness Index.