A big part of the Indian population suffers from hunger. One may think that the culprit is insufficient food production. However, that is not true. Colossal food wastage is behind India’s big hunger problem. India is the second largest producer of fruits and vegetables in the world. But, every year, Indian farmers lose their harvest due to absence of infrastructure and storage facilities. Around 40 per cent of fruits and vegetables and 20 per cent of grains are wasted due to insufficient storage infrastructure. Food doesn’t reach consumers. Food worth about Rs 50,000 crore is wasted every year. Such huge wastage has other implications as well. It results in the release of millions of tons of methane gas from garbage dumps, polluting the environment. Plus, billions of gallons of freshwater is lost, which was used to cultivate the wasted food. A solar innovation promises to change all that.

To solve the problem of the huge food wastage, Indian Institute of Technology (IIT) alumni Devendra Gupta, Prateek Singhal and Vivek Pandey have developed a device called Ecofrost, which lets farmers increase the shelf life of their produce as well as operate in a bigger market. It also provides farmers with a solar powered cold storage unit in order to preserve food that tends to spoil fast, such as tomatoes, spinach, or capsicum. Powered by solar energy, the solar innovation allows the products to be stored for up to 21 days.

Generally, available infrastructure facilities are available only to big farmers or the middlemen, who hoard produce and use it to manipulate prices. However, small farmers do not have storage facilities to save their crops and thus end up losing a big portion of their earnings. They are forced to sell their produce at low prices immediately after the harvest. 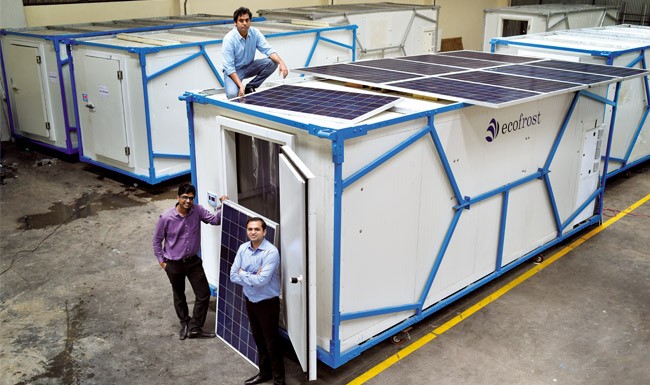 Farmers can control the temperature of produce through phones

This solar product claims to help small farmers preserve their crops efficiently since it does not depend on electricity. The innovators claim that after a two-year period, the solar innovation can lead to more than 40 per cent increase in profits. What is more is that farmers can control the temperature of the device through their phones. They can do this through selecting the produce they want to store. On overcast days or when there is no sun, the solar innovation is equipped with batteries which store energy and thus maintain temperatures till about 30 hours.
This necessary solar innovation has the potential to strengthen the agricultural produce infrastructure in India as well as can be a boon for small and helpless farmers. The solar innovation can help them open doors to unexplored possibilities.

‘Reducing food waste could have impact on natural resources depletion and degradation, food insecurity, national security, and climate change,’ says an official of Rethink Food Waste through Economics and Data, a US think tank.

Hunger and food insecurity is a frontline problem in India

On Global Hunger Index, India is at the 55th position. According to an International Food Policy Research Institute (IRPRI) study, around one-sixth of the population is undernourished and 190 million people go hungry daily. As many as 30 per cent children below 5 years of age are underweight. Technology and such solar innovations can surely go a long way in preventing food wastage and improving food security.