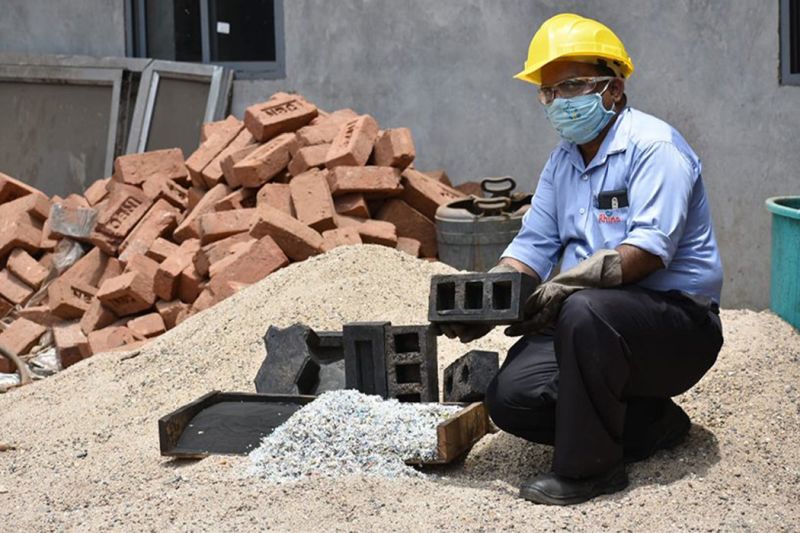 They are made by mixing silica-laden foundry dust and discarded plastic at 80/20 ratio and then compressing it. The bricks are ready for use after being rested for 30 minutes.

There is no use of water in the making of these bricks and the walls built with these bricks do not need to be cured with water. Rhino Bricks are 2.5 times stronger than standard bricks and nearly 1/3rd lighter in weight than conventional bricks making them cost effective.

Rhino bricks can sustain about 14-15 kg per cm square while conventional clay bricks can sustain between 3.5-7 kg per cm square. The manufacturing process releases zero emissions into the environment. However, the sand also produces massive amounts of fine silica-laden dust. While this foundry dust can be captured with dust collection systems, there is the problem of what to do with it. It’s health hazard,and cannot simply be dumped. Thus, Rhino was tasked by a client to solve their foundry dust problem.

After much experimentation, Rhino Machine R&D team discovered that if the dust were mixed at an 80/20 ratio with another harmful waste product–discarded plastic, it could be compressed into bricks that resemble the real thing.

Join with me to congratulate Manish Kothari and team and wish them all success. Watch https://lnkd.in/g595H7B

Faiza Fatma is Assistant Editor, GreenUbuntu.com. She is passionate about environment and sustainability.