How Climate Change Imagery Has Changed From Polar Bears to People 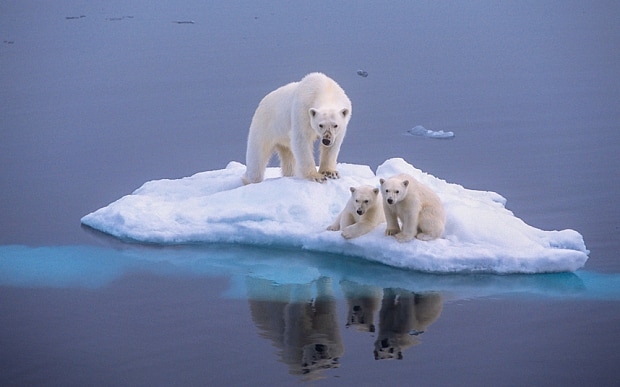 Where have the polar bears gone? For decades, climate activists and the media put forth images of polar bears standing on tiny, rapidly melting islands of ice surrounded by ocean. But in a Washington Post climate article last week, the polar bears have been replaced by an image of Yupik Inuit school children playing on a chunk of melting ice surrounding by ocean. The image reminded me of photos of families stranded on rooftops of houses engulfed by the floodwaters of Cyclone Idai in Mozambique and Hurricane Katrina in New Orleans.

Climate change imagery—and language—are no longer fundamentally about the environment. No longer is the climate movement about far-off Arctic wilderness, or pitting polar bear preservation against fossil-fuel powered economic development. Or about wealthy white people versus black and brown people struggling to survive.

Witness the Green New Deal, which by its very name suggests a reconciliation of environment with economic equity. Its primary spokesperson: Alexandria Ortega Cortez, a 29 year-old Latina from the Bronx. Its policy guru: Rhiana Gunn-Wright, a 29 year-old African American from Chicago, whose previous policy credentials span welfare, education, crime, and health. Gunn-Wright, who is also a Yale graduate and a Rhodes Scholar, fiercely defends the need to tackle climate change, poverty, and racism at the same time.

Asked on a Vox podcast why equity matters in climate goals, Ms Gunn-Wright cites moral and power-building reasons. “I used to have asthma as a kid… How close did I live to a power plant?” Referring to air quality related suffering of communities of color and coal miners, she continues: “These are people who have lost their bodies, their lives sometimes, for fossil fuels. … A lot of the same areas that have suffered from fossil fuels could easily be priced out of distributed solar. … The idea that we would do this transition (to clean energy) on their backs is just abhorrent….” Turning to farmers whose land was inundated by floods in Iowa and Nebraska, she continues: “those are folks who might never have their farms again.” And in terms of forming the coalitions necessary to turn the tide of American politics, Gunn-Wright says: “climate change, until you understand that it might be one of the causes of your baby’s asthma, might not be something that you are ready to move on, to vote on. So I think there’s a real power building element” to linking climate with social and economic equity.

Among those integrating climate and equity are long-time climate activist and former US Vice President Al Gore, and Reverend William Barber II, co-chair of the National Poor People’s Campaign. In February, Gore and Barber held a town hall meeting. “We agree, brother Gore and I, that these issues are moral issues, justice issues,” Barber claimed from the podium in Hayneville, Alabama. “The reality is it’s about human rights. Fundamental justice and fundamental rights.” Gore’s recent tour of the southern states also brought him to the Equal Justice Initiative’s Peace and Justice Summit in Montgomery Alabama, where he shared the stage with local justice advocates who link climate change to flooding and stagnant water that provides breeding grounds for hookworm, a serious health concern.

The Cornell Climate Online Fellows connect climate, health, and justice, and not just in the US. Climate Fellow Dr. Chandra Degia is a professor at the University of West Indies and a Talk Show Host for Caribriddims Radio. Her One Health Caribbean team of human, animal, and environmental health professionals worked with Jamaican Maroons in Scotts Hall, a community established by escaped slaves in the mountainous interior of the island. As the result of a prolonged drought, pigs were despoiling the one remaining water source, tourism was down, and the community’s water security was at risk. Chandra and her colleagues engaged local Maroons and reggae star Bay-C in a “river health song competition,” thus bringing awareness of the links between water, livestock, and economic health to young Jamaicans. According to Chandra, “Environmental issues, including climate change, are steeped in a myriad of interwoven social, cultural and financial complexity, including colonialism and neo-colonialism.”

Omer Al-Shareqi, our Cornell climate fellow from Yemen, goes offline whenever violence flares up. He was considering green commuting as his fellow climate action, but was troubled by what he saw as a compelling moral issue to address landmine deaths in Yemen. Then he read a Facebook post about an unsuspecting child who picked up a landmine on the way to school. After the young boy entered the classroom, the landmine detonated and killed him. Omer switched his climate action to landmines, which he sees as linked to climate change. More severe floods carry landmines into villages and during droughts, winds carry away the sand to expose landmines. At this point, unwary children are more likely to pick up the explosive devices. Omer is not the first person to connect climate to unrest; scientists attribute recent waves of violence and migration to changing weather patterns robbing farmers of the ability to grow food.

Language about climate change is no longer focused on the environment. It’s about equity and health. It’s about resilience of individuals and communities to devastating floods and fires. It’s about war and refugees. Where have the polar bears gone?