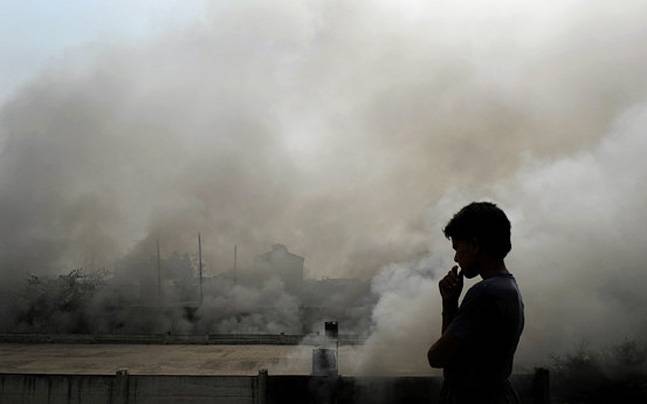 Over the past few years, reporting on India’s air pollution crisis dominated the news. The state of capital city Delhi and health costs of living in it has been declared a ‘national crisis.’ Not only that, scientists report the air pollution is now set to affect weather patterns, including the monsoons, which provide critical rainfall that has kept South Asian civilization going for thousands of years. Pollution from India reaches even the Hindu Kush Himalayas, causing smog as well as environmental damage in the fragile region. The problem of course is not just India’s. Bangladesh’s capital city Dhaka is struggling with the menace. In Pakistan, lack of measuring units means there is not even a real understanding of the crisis.

India’s air pollution plan: In India, the issue peaks before the winters, as stubble burning leads to Delhi getting blanketed in smog. The problem, though, is an all year one and not just for Delhi. It seems the problem may be just as large, if not larger, in the smaller cities, except a lack of measuring units and less media attention, means that it is often ignored. There were, therefore, great expectations from a National Clean Air Programme (NCAP) drafted by India’s Ministry of Environment, Forests and Climate Change. It is open to public comment till May 17. Unfortunately, it is such a poor draft that it needs a fresh look after consultations with independent experts, as well as victims of air pollution. This is especially important at a time when the World Health Organisation has stated that of the 15 cities in the world with the worst levels of air pollution between 2010 and 2016, 14 were in India.

A significant part of the 19-page draft NCAP is taken up with contesting and belittling studies of this kind, especially when such studies are carried out by international organisations. When it comes to air pollution, this is in consonance with the state of maximum possible denial in which the ministry, the Central Pollution Control Board (CPCB) and state pollution control boards have been living for years.

With more and more Indians falling prey to respiratory diseases, and doctors in various cities drawing a direct correlation between heavily polluted areas and such diseases — especially among children and the elderly — such denials lack credibility. It is especially surprising because a medical doctor now heads the ministry, and his own experience and discussion with colleagues should convince him that no one is overstating the air pollution problem.
It was good that the environment ministry formed a team with the Indian Council of Medical Research (ICMR) to focus on health impacts of air pollution. But now, the draft NCAP says, the report of the team is to be considered by the environment and health ministries for yet more studies. While studies are clearly important, they should not be used as an excuse to delay action. Unfortunately, the draft NCAP leaves the impression that is exactly what these studies are doing.

The draft spends much of its space discussing ways to monitor and measure urban air pollution and to apportion the pollution load by sources in a more detailed way than is being done now. It also spends a lot of space on the recent development of a National Air Quality Index (NAQI). While all that is clearly necessary, it is just as clearly not sufficient. There is already plenty of data available on pollution load and pollution sources to warrant immediate action. That is where this draft NCAP fails. The only immediate concrete action it suggests is to plant more trees on roadsides to absorb pollutants. Again, it is something necessary but clearly insufficient.

The devil is in the implementation: India’s air pollution plan

India has a large number of laws, rules and guidelines to control air pollution. The problem is that they are not implemented with anywhere near the level of stringency that is required. The only significant idea that the draft NCAP has on implementation is the need to expand and train officials of the CPCB and state pollution control boards for this purpose. Again, this is something clearly necessary, but it is bound to be a long-term process, unable to handle the air pollution problem with the required urgency. Even the 42-point action plan for the CPCB in the draft fails to show this sense of urgency.

Apart from this, the sections on implementation in the draft NCAP are essentially about measures already in place, with little sign of understanding the extent to which these measures work or do not work, and why. An example is the Graded Response Action Plan (GRAP) for Delhi and the National Capital Region. This plan is controlled by a highly dedicated group of experts. But every time they try to implement it, they are confronted by factory owners’ lobbies, realtors’ lobbies, transporters’ lobbies, vehicle manufacturers’ lobbies, farmers’ lobbies and even sundry ministries in the central and state governments. The result is that the implementation is at best partial. The draft NCAP is silent on how such a situation can be improved in the short term.

It is clearly difficult to tackle air pollution in India, especially in the Gangetic plains, which is actually a big valley with relatively little wind for much of the year. That inhibits dispersal of air pollutants. But other — albeit much smaller — valleys have been cleaned up, most notably the southern California valley in which Los Angeles is located. Theoretically, there is no reason why the same measures should not work in India. What is needed is political will to implement those measures.

India’s air pollution plan: It is perhaps too much to expect that a draft prepared by a ministry will talk about the need for political will. But it could surely have talked about the need for more active citizen participation. In many Indian cities, especially in the northern parts of the country, there is now a situation in which residents talk about the terrible air pollution, then jump into their diesel SUVs and drive off to buy air purifiers for their homes. Delhi is perhaps the only city in the world where a Bus Rapid Transport corridor project failed because motorists refused to abide by the rules. There is an urgent need to take on such behaviour.

Just as urgently, there is a need for the bureaucrats and technocrats to accept citizen science on air pollution. In Beijing, air pollution was brought under some sort of control only after the average resident downloaded a simple pollution monitor on to his or her smartphone and started sending the results to all and sundry all the time. In India, incipient attempts to do the same have elicited sharply hostile reactions from the ministry and the CPCB, whose officials keep talking about how inaccurate those monitors may be, how they are not calibrated properly and so on.

India’s air pollution plan: What the technocrats miss is that the exact concentration of a specific pollutant is far less important than the fact that the air quality is bad enough to hurt, and to hurt badly. Of course, the officials need to know the details so that they can tackle the pollutants and their sources. But instead of contesting, if they embrace what people are telling them, they will be in a far stronger position to implement the rules.

An earlier version of this article appeared in indiaclimatedialogue.

South Asia Director at The Third Pole: Joydeep Gupta is an Indian journalist who has been writing on environmental issues since covering the Bhopal disaster in 1984. For his contributions to environmental journalism, he won the 2012 Green Globe Award at the Delhi Sustainable Development Summit.