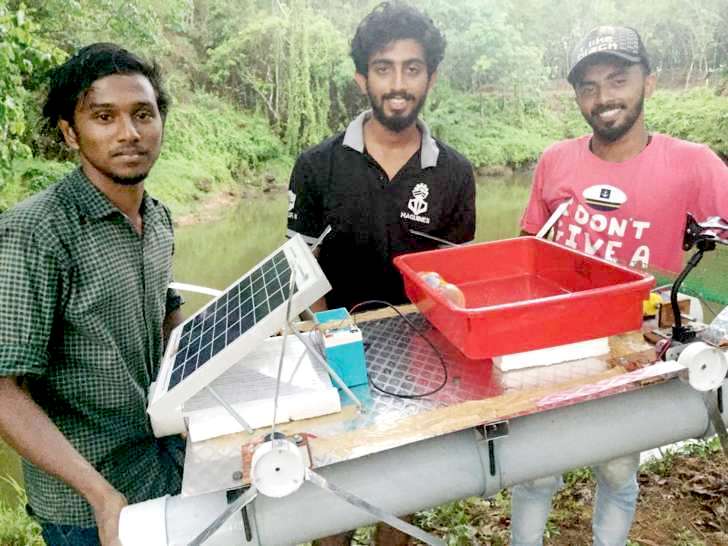 Students can contribute a lot to the development of the society and they are providing cutting edge innovation in instances where professionals have been caught napping. Therefore, we need to nurture the creativity and innovative spirit of today’s youth. Their ideas need encouragement and innovation. Mechanical engineering students of the Cochin Institute of Science and Technology of Muvattupuzha, Kerala, have developed a Solar Energy Innovation in the form of floating machine which can be used to clean polluted water bodies. The eventual aim is to basically control the exponential increase in pollution that is caused by the dumping of garbage in water bodies. Eldho Sunny, Jerin Paul V Shajan, KR Jinu Raj and Amal Prasannan were the primary contributors to the innovation.

Pollution is a big threat to mankind. According to estimates by 2030, the oceans would have more plastic debris than the fish in it; such is the scale of its pervasion. People as well as civic authorities are unable to devise a mechanism to for proper waste management that leads to efficient disposal of waste. They always end up dumping garbage in variouis water bodies such as oceans, rivers, and lakes.

Toxic effluents as well as contaminants in the garbage seep through the soil over a period of time and finally find their way to groundwater. This Solar Energy Innovation which is like a floating machine has been designed in the shape of a boat. The propellers of this device work through a motor. This is attached to an arm and bucket in the shape of an excavator. This part is to be used for collecting waste from the water and beat plastic pollution, which was the theme of this year’s World Environment Day 2018.

Moreover, the operator has unhindered visibility and can even remotely view the waste that is present in a particular water body through the aid of camera, which is attached to the Solar Energy Innovation and control the direction through a smart phone, including an android one. The Solar Energy Innovation can clean plastic waste as well as aquatic weeds such as salvenia. It is high time, the civic bodies used the innovation to save rivers and other water bodies before it becomes too late!