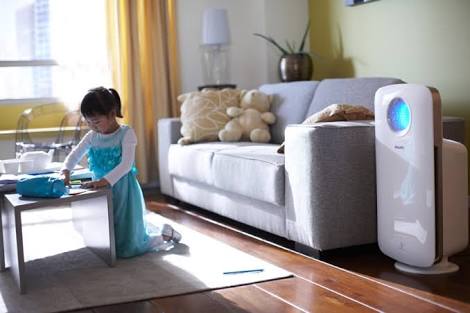 There is a state of medical emergency in Delhi. The Delhi Smog is so hazardous that it is equal to smoking 50 cigarettes a day. Stubble burning and Diwali pollution has turned the National Capital into a ‘gas chamber.’ Air quality index is 5 times worse than the limit set by the Central Pollution Control Board limit. Air pollution is affecting visibility, trains, and flights. It is permeating homes as well. Breathing is a task. The smog is affecting every one: senior citizens, children, construction sector workers, and vendors. At this level of air pollution, healthy people can also get affected. People with respiratory diseases will particularly be hit hard. In fact, at times indoor air quality can be worse than outside. One of the ways to combat the situation is through air purifier. Let’s look at some of the air purifiers that can help you fight Delhi Smog.

1) Xiaomi Mi Air Purifier 2 @ Rs. 8999: This device cleans 400 square feet in around 10 minutes. The machine contains EPA triple layer filter and removes harmful PM2.5. It also has real-time AQI monitoring. It can be controlled through the Mi Home app. In fact, Xiaomi cut product pricewhich was 9999 to help Delhiites fight Delhi Smog. The company confirmed it in a tweet.

2) HoneyWell AirTouch AI8 @ Rs. 16,999: The device from HoneyWell carries out a three-layer filtration process. It has the HiSiv filter, HEPA filter as well as a washable prefilter. The device thus effectively removes big dust particles, formaldehyde, bacteria, as well as volatile chemicals. HoneyWell claims that this device can remove PM2.5 particulate matter and has an efficiency of over 90 percent. There is touch panel also for operating the machine.

3) Panasonic F-PBJ30ADD @ Rs. 9000: This Panasonic device has a CADR of around 215 sq ft with nano technology that releases OH radicals in water molecules, thus effectively removing bacteria as well as odour. It also contains a dirt sensor which detects around PM 2.5 level. The HEPA composite filter, it is claimed, captures pollutants efficiently.

5) Sharp Air Purifier Fu-A80E @ Rs. 27,190: This machine is equipped with True HEPA Filter. This reportedly reduces PM2.5 particulate matter from the air to nil. The Plasmacluster Ion Technology also removes infections as well as odor. The CADR is 480 m3/h. there are dust sensors for automatic monitoring of air quality. It also has an auto restart function.

6) Philips 1000 Series @ Rs. 8799: Philips has claimed this device can remove 99.97 percent of allergens as well as ultra-fine particles as tiny as 0.02 microns, which is 100 times smaller than PM 2.5. Equipped with the VitaShield IPS (also called Intelligent Purification System) Technology, along with Auto Mode as well as Allergen Mode, the machine has a clean air delivery rate (CADR) of 270 m3/hour, which is not bad going by its price. The machine comes with extra-thick NanoProtect TRUE HEPA Series 1 Filter.

8) BlueAir Sense + @ Rs. 39,999: This is one of the well-known brands of air purifiers. It can trap 99.97 percent of airborne particles. It can also capture till the particle size of 0.1 micron. It can reportedly change the air within a house up to 5 times in an hour. The machine has been made or a room size of 200 sq ft. Its motion sensors are useful. The device is Wifi enabled and can be controlled it through a mobile Application.

9) Nirvana Being Purifiers @ Rs. 94,990: Nirvana Being has launched Airgle AG600 PurePal Air Purifier as well as Airgle AG900 PurePal Clean Room Air Purifier. These purifiers use cHEPA filtration that has been certified that it filters ultra-fine particles up to 0.3 microns. The claimed efficiency is more than 99.991 percent. Airgle AG600 has a 35 sq. ft. cHEPA filter and deep carbon blend. It is efficient for medium-sized rooms.