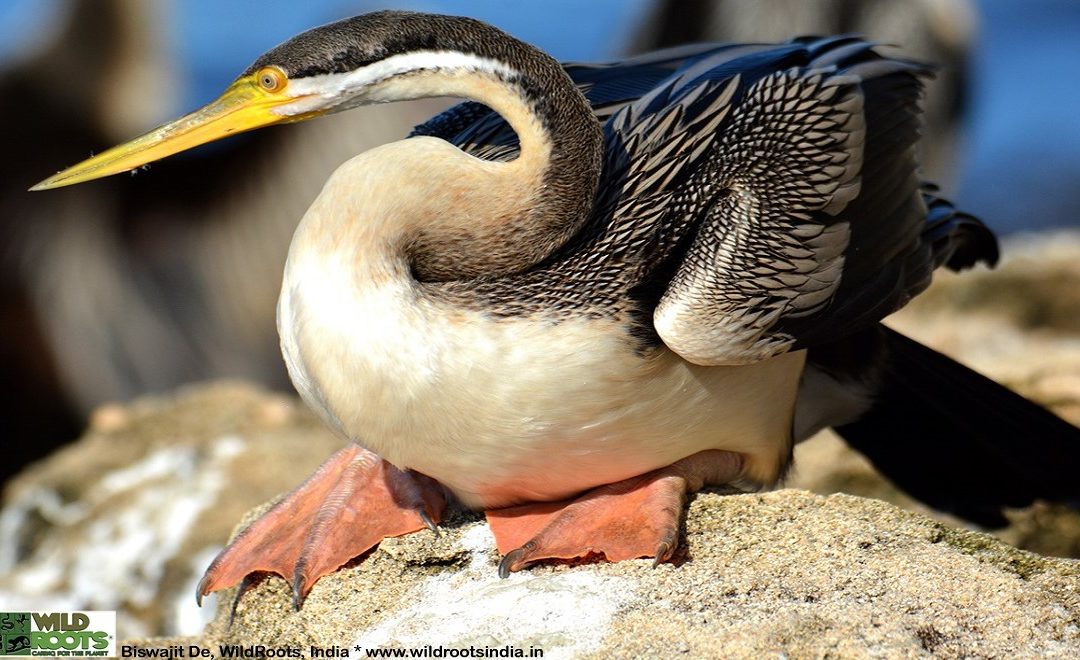 Because of its long and slender neck, the Australasian Darter is sometimes called the snakebird. Usually inhabiting freshwater wetlands, darters swim with their bodies submerged beneath the water’s surface, with only the sinuous neck protruding above the water, enhancing its serpentine qualities. Darters forage by diving to depths of about 60 centimetres, and impaling fish with its sharp, spear-like beak. Small fish are swallowed underwater, but larger ones are brought to the surface, where they are flicked off the bill (sometimes into the air) and then swallowed head-first.

The Darter is a large, slim water bird with a long snake-like neck, sharp pointed bill, and long, rounded tail. Male birds are dark brownish black with glossy black upperwings, streaked and spotted white, silver-grey and brown. The strongly kinked neck has a white or pale brown stripe from the bill to where the neck kinks and the breast is chestnut brown. Females and immatures are grey-brown above, pale grey to white below, with a white neck stripe that is less distinct in young birds. The Darter is often seen swimming with only the snake-like neck visible above the water, or drying its wings while perched on a tree or stump over water. While its gait is clumsy on land, it can soar gracefully to great heights on thermals, gliding from updraft to updraft. It has a cross-shaped silhouette when flying.

The Darter’s slender body, long, snake-like neck and its pointed, rather than hooked, bill distinguishes it readily from the bulkier cormorants with which it is often found.

Distribution
In Australia, the Darter is found from Adelaide, South Australia, to Tennant Creek, Northern Territory and then to Broome, Western Australia. it is also found in south-western Australia, from Perth to Esperance. Worldwide, it has been thought of as one of two mainAnhinga species (the other, A. anhinga, is found in North America), found in the southern half of Africa, Madagascar, Iraq, Pakistan, India, south-east Asia, Indonesia and New Guinea. However, A. melanogaster is now considered to be further divided into three species, with rufa being found in Africa, melanogaster in south Asia and novaehollandiae in New Guinea and Australia (the Australasian Darter).

The Darter is found in wetlands and sheltered coastal waters, mainly in the Tropics and Subtropics. It prefers smooth, open waters, for feeding, with tree trunks, branches, stumps or posts fringing the water, for resting and drying its wings. Most often seen inland, around permanent and temporary water bodies at least half a metre deep, but may be seen in calm seas near shore, fishing. The Darter is not affected by salinity or murky waters, but does require waters with sparse vegetation that allow it to swim and dive easily. It builds its nests in trees standing in water, and will move to deeper waters if the waters begin to dry up.

“We abuse nature & wildlife because we regard them as commodities belonging to us. When we see them
as a Community to which we belong, we may begin to treat them with love & respect”: Aldo Leopold

Designer, Photographer & Teacher. In his own words – ‘Just as I love Ideas...and like making Stuff, I treat the process of Creativity with a rare and a wonderful Reverence. I believe, better than anyone, that while ideas can be ultimately powerful, they begin as fragile, barely formed thoughts, so easily missed, so easily compromised, so easily squished. But I never cease to think deeply about almost everything and strive to be the most unconventional thinker, and an eager learner. I have no time for anything....other than working hard to nurture my passion for Nature and inspiring young people! http://www.wildrootsindia.in/ is his brain child. You can reach him at wildroots.guwahati@gmail.com