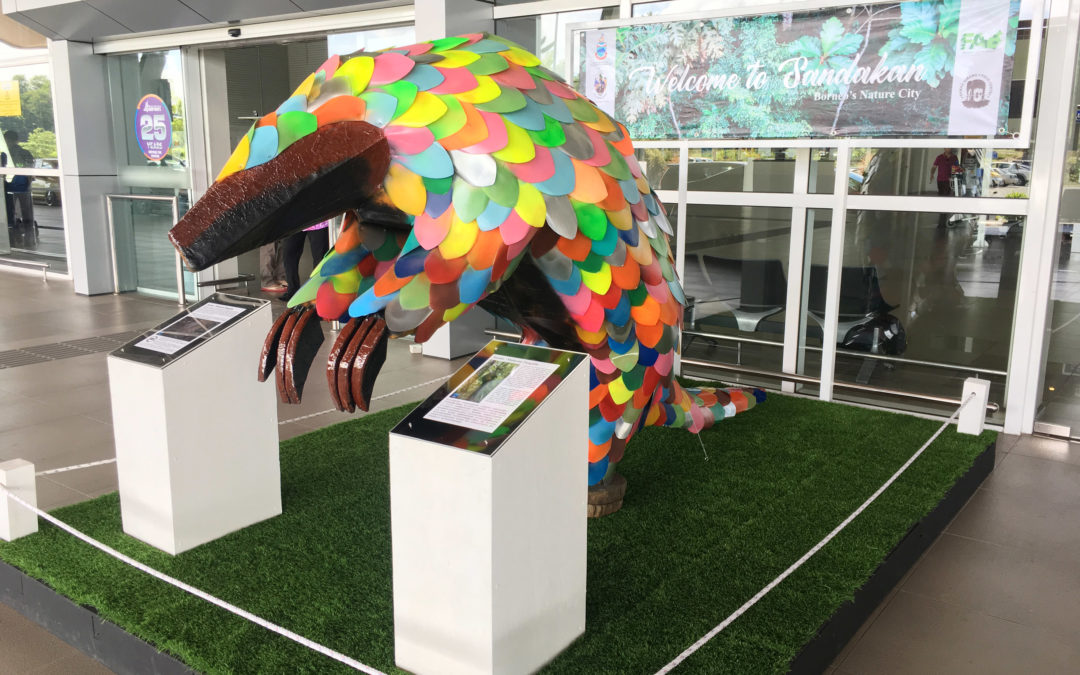 Despite the global Illegal trade in pangolins increasing massively even after many enforcement efforts and successes, there is a disquieting tendency to focus only on charismatic species like tigers and rhinoceros in India. Endangered species like the ‘barely heard’ pangolin continue to face alarming levels of persecution worldwide, reports environment and wildlife journalist Urmi Bhattacharjee. Here is the pertinent report on the occasion of World Wildlife Day: A Greenubuntu Exclusive Story.

There are barely any monitoring, investigation or collaborative efforts and multi-agency co-operation to protect these less charismatic species. Pangolins are ant-eating mammals that are native to Asia and Africa and are one of the world’s most trafficked mammal. These are non-aggressive, shy creatures that resemble a miniature dinosaur and are sometimes referred to as a ‘walking pinecone’. There are four Asian and four African species of Pangolins.

The threat to the Pangolin

A report released by TRAFFIC and IUCN conducted after a study post the world’s largest ever pangolin seizure in China identified as many as 159 different, international trade routes that were used by traffickers. The seizure was of 11.9 tonnes of scales from a ship in Shenzen. According to this new research released, 20 tonnes of pangolins and their parts have been trafficked on an average globally every year and 27 new global trade routes annually are used annually by smugglers.

In India, despite it being protected under the Wildlife (Protection) Act, 1972 (protection of species that are endangered or threatened or rare), there are still no systematic studies conducted to know even their population status. The Indian Pangolin is found throughout the country south of the Himalayas while the northeastern region has populations of Chinese Pangolin across Assam and the Eastern Himalayas.

On the eve of World Pangolin Day 2018, this February, a Traffic study has revealed that 2009-1027 saw at least 5,772 pangolins in illegal wildlife trade, close to 650 pangolins every year since 2009. Wildlife watchers suspect that the actual numbers would be far more than this since, this is just a conservative estimate and a fraction of a wildlife trade.

Pangolin poaching in Indonesia, Myanmar, India on a high

Indonesia, which is home to Sunda Pangolin Manis javanica specimens, saw Pangolin poaching and has lost up to 10,000 pangolins a year to illegal trade despite the poaching of this species prohibited under the law. There were many enforcement successes, attempts to stop the trade, and several seizures, 21 in the year 2016, still Pangolin poaching continues rampantly.

The Sunda Pangolin is also Critically Endangered and therefore considered to be facing an extremely high risk of extinction in the wild. The Island of Sumatra is one of the main centre points and key link to the illegal pangolin trade between Indonesia, Malaysia and Singapore. The area has been serving as a prime pre-export collection point.

Myanmar is also another hot bed and a significant transit country for the trade. As per surveys, between 2006 and 2015, 42 bags of scales, 32 whole skins, 16 foetuses or pangolin parts in wine, and 27 whole pangolins were found openly for sale (Source: Traffic)

In India, there is a regional shift in the poaching and smuggling of pangolins. Pangolins are netted, trapped and poached mostly for their meat and scales. In most of these regions, Pangolin meat is considered to be having ‘high medicinal value’- a belief largely unfounded. The scales when grounded and eaten with rice are said to reportedly solve lactation issues, blood circulation problems and even cancer. Globally. the scales are priced at anything between $600 and $1000 per kilo while the weight per scale is about 10 g. In some parts of India, China and a few other places, there are experiments going on to use Pangolin scales for the development of self-healing bulletproof vests.

Pangolins hunted and trafficked for scales and flesh

The scales are made of keratin: the same protein that constitutes human hair and nails. They have been utilized by humans for many centuries for making armor coats and jackets since the shape and durability of the coats are very high. Some scientists say it is because of their extra-ordinary molecular structure that allows them to retain their shape even when subjected to tremendous physical shocks. Further, according to those scientists, water could awaken the memory thereby inducing self-healing process with the participation of shape changing molecules. While the scale is touted as a wonder of Mother Nature for all its intrinsic qualities, it is these factors that have led to higher threat of being trapped, snared and poached.

Pangolin fetus is considered to be an aphrodisiac, while the Pangolin tongue which is longer than its body, is considered to be a lucky charm in some parts of China. The trade link goes on from the hunter level to the mid-level trader and the higher level traders to the final destinations. Malaysia was reported to be the most prominent transit country in the movement of pangolins from Indonesia while China and Viet Nam were implicated as destination countries. Indonesia is also being looked at as a potential transit county.

All Hope is not lost

The Pangolin species is yet to get its due attention globally, but all hope is not lost as in some parts of the world including Malaysia and Nigeria, rigorous efforts are being taken to combat the existential threat to the species. Given the Pangolin’s average seven-year generation span and the incessant large-scale seizures, experts fear that the populations are likely to be in decline as a result of the trade. The need of the hour as per experts is to have collaborative efforts, monitoring, strong judiciary and greater awareness for prosecutors to help address the current threat of trafficking. Habitat fragmentation, degradation, land grabbing, road construction are identified by wildlife watchers as the main reason for rampant poaching of Pangolins.

In a community called Yangshila (180-1950 m), which is situated in the Siwalik tropical foothills of the Himalayas, the Learning Grounds have played a vital role in protecting both the species of pangolins. In Nepal, KTK-BELT was created in 2014 as a means to address these concerns and massive awareness activities are being done on a war-footing to pledge the protection of the animal. The idea has been replicated across youth groups in Singapore, South Africa, UK, USA and other parts of Nepal.

“People are now more aware of the evolutionary uniqueness and ecosystem benefits of pangolins and that knowledge has powerful conservation impact. The whole idea is to forget the idea of age or professions and have everyone from kids to the elderly, from rangers to poachers come under one tent. It’s through that positive dialogue that’s we can save this species,” Priyanka Bista, Co Founder KTK-BELT

In July 2017, the custom department had seized approximately 8 tonnes of pangolin scales at the Sepanggar Bay, Kota Kinabalu bound for China. Reportedly this was the biggest seizure in Sabah history and the scales were estimated to have been harvested from 16,000 pangolins. A month later, another seizure of over 5 tonnes of pangolin scales were seized in Kota Kinabalu together with 3 tonnes of elephant tusks.

On 17 February 2018, in conjunction with the World Pangolin Day “The Pangolin Sculpture” was launched in collaboration with the Future Alam Borneo, Danau Girang Field Centre and Malaysia Airports Holding Berhad.

Yang Berhormat Datuk Hj. Kamarlin Bin Hj. Ombi, Assistant Minister of Tourism, Culture and Environment Sabah, Malaysia Borneo said, “Conservation NGOs working together with the Malaysian airports to combat wildlife crime through this art ‘giant pangolin sculpture’ which will act as an ambassador for our wildlife to remind us that human and wildlife must coexist with each other if we want to live in harmony and be happy.”

This upcycled pangolin sculpture was designed from items that are trashed. It is 3D polygon structure, that is made of 90 sq ft of polycarbonate sheets from salvaged advertising boards, and 180 pieces of used juice bottles. At least 600 scales were hand-cut from the bottles and colored individually.

“Instead of a realistic portrayal of the animal , we chose to go very colourful, to get your visual attention,” said – Anton Ngui, Chairman, Future Alam Borneo society (FAB) , a Sandakan based ngo that seeks to create opportunities, connections and platforms to showcase Borneo’s ecological potential to a broad audience, through channels of music, art, design, architecture, physical activities and more.

In 2016, Chinese customs seized over 3 tonnes of pangolin scales mixed with wood that involved killing of 7500 pangolins estimated at a price of $2 million. They deal with the challenges and threats of illegal trading of pangolins. The Pangolin Conservation Working Group Nigeria (PCWGN) is relentlessly fighting towards its conservation. In 2016, the group conducted awareness on Pangolin Conservation in Oyo State educating several school children on the current threats. The organization has worked with Hunters Associations and Law Enforcement Agencies in the drive to conserve Pangolins and has also been involved in the tagging and releasing of rescued pangolins into protected forest areas.

“Exporting of Pangolins is causing so much embarrassment to Nigeria because the consignments are not discovered at the Nigerian border most of the time but at borders of other countries where they are shipped to. It makes one wonder what is happening to the law enforcement agencies in Nigeria,” said Dr Olajumoke Abimbola Morenikeji, Associate Professor, Department of Zoology, University of Ibadan, Nigeria.

The PCWGN has further plans to acquire a large piece of land for rehabilitation and research on rescued Pangolins apart from the use of protected areas for release and are tying to introduce GPS tags on the released animals to monitor their behavior.

This World Wildlife Day, let’s take a pledge to conserve our wildlife, particularly the endangered species such as pangolins.