How an elephant calf was rescued: Lessons in wildlife rehabilitation 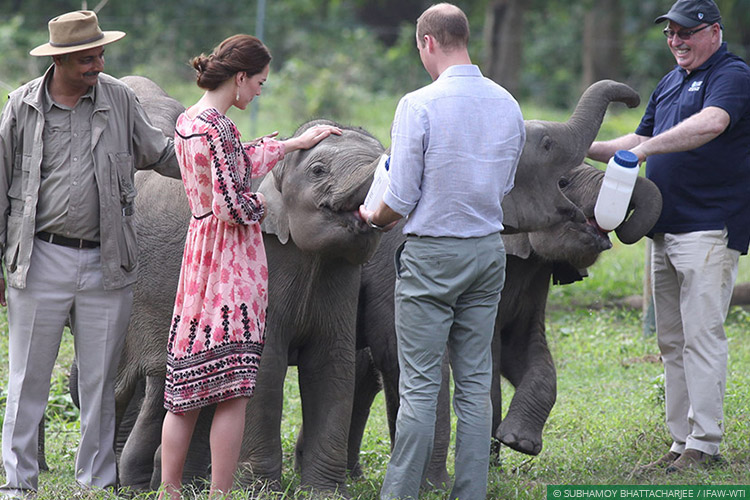 A couple of years back, Philip, a month-old elephant calf and his mother, were injured. As they walked through the hills of Assam’s Ouguri Range, which is east of Guwahati, the elephant calf lost his footing and slid down the hill. He then fell into a shaft and was trapped. Desperately, his mother did try to rescue her baby and climbed down. However, she too found herself stuck. Local bamboo cutters spotted the animals and spread the news. A rescue team from the Center for Wildlife Rehabilitation and Conservation (CWRC) reached the spot with equipment, medicines, and supplies within 24 hours. The calf was injured, with bruises on the back, head, as well as the legs. The wildlife rehabilitation and rescue team, led by Drs. Abhijit Bhawal, Bhaskar Choudhury, as well as Anthony Nokso Phangcho, had a difficult task. They needed to break the rock enclosure so that the calf and its mother could be freed.

With help from local residents from small villages in the Hamren subdivision in Karbi Anglong, who cut through the rocks as well as others who helped with the lifting, the Assam Forest Department rescue team was able to haul the baby elephant out of the abyss. “It was a very risky operation,” says Dr Abhijit. “A wrong step could have trapped us. It took us 3 hours to break through the rock and rescue the elephant calf.”

After being rescued, the calf was carried down steep slopes to foothills on a stretcher and transported to a range office 5 km away. The calf was put on drips consisting Dextrose, B complex vitamins, antibiotics, and steroids. In 6 to 7 hours, his condition was stable. Philip’s mother however collapsed 12 hours of the team’s arrival and succumbed to injuries before she could be rescued. The calf was named Philip Dev and is today cared for at the CWRC near Kaziranga National Park along with other animals undergoing wildlife rehabilitation.

The center is full of such stories: Rani the elephant was a 13-month female elephant calf when she was rescued from the Deepor Beel, a wetland close to Guwahati. She got separated from her herd. Though the CWRC tried to reunite her, the herd remained 2 km inside the wetland. The baby elephant was later shifted to the rescue center after spending 8 days at the Guwahati zoo.

Rani and Philip are now the best of friends. They are among the several displaced animals under the care of veterinarians: Nunai is a displaced baby elephant; Siloni is a displaced hoolock gibbon; and Mynah is an orphan baby rhino living peacefully among 7 elephants, 5 rhinos, 2 leopards, 2 hoolock gibbons, 1 otter pup as well as a jungle cat. This is home for them till they are rehabilitated completely in the wild.

This wildlife rescue center is located close to the Borjuri village, which is adjacent to the Panbari Reserve Forest and the Kaziranga National Park, in Assam. Spread over 8 hectares of land, the CWRC has rescued many animals and rehabilitated them back in the wild. In the case of those permanently displaced or orphaned, they provide them with a home.

How the wildlife rehabilitation center started

In 1988, floods devastated wildlife in Kaziranga National Park. It killed thousands of animals and displaced young ones from the herds. The same was repeated 10 years later, prompting conservationists to find a way to rehabilitate animals in such distress. In July 2000, The Wildlife Trust of India (WTI) together with the International Fund for Animal Welfare (IFAW) started the Flood Rapid Action Project in Kaziranga. Soon they approached Assam Forest Department to set up rescue center for scientific care of rescued wildlife. With support from the Government of India (GoI)’s Animal Welfare Division, the CWRC came into existence on August 28, 2002: the only wildlife rehabilitation and rescue center of its kind in the entire country to care for multiple species.

Veterinarians at this center care for a number of wildlife emergencies, resulting either from natural or anthropogenic reasons. They follow a system which is called: ‘Conservation Breeding for Reintroduction. The primary aim of treating and stabilizing animals and releasing them back into the wild is carried out close to the site of rescue.

The center has cared for thousands temporarily as well as permanently displaced animals, covering over 130 species. About 50 per cent of the animals (brought to the CWRC) have been released into the wild successfully, after treatment in temporary captivity. In the 2012 floods, 130 cases of displaced animals, including swamp deer, hog deer, Burmese rock pythons, rhinos, as well as elephant calves were attended to by the center. Hundreds were released back into the wild.

The CWRC’s main costs involve, purchasing meat, milk, medicines, vitamins, and antibiotics. Each month, leopard cubs alone eat meat worth Rs 28,000. Rs 1 lakh is spend every month on milk, particularly for the elephants. A baby elephant can consume 12 liters of milk a day.

The Beginning of wildlife Rehabilitation in Assam

however, not all animals rescued are brought to the center. The CWRC is reserved for the severely injured and needing intensive care. In keeping with the international protocols, every wild animal kept is assigned a mother or keeper who looks after it. The self-motivated keepers are not just employees. They are spurred by their passion for wildlife conservation. For them, protecting wild animals is a way of life. Over time, animals bond with keepers and learn to trust them.

“Animals come to the transit home in agony and fear. They fear the new surroundings and are devastated after being separated from the mothers,” says Bhadreshwar Das, one of the keepers at the transit home as he recalls Philip’s rescue. Philip was traumatized when he first came to the center. He was disoriented and terrified. “It takes time for the animals, especially elephants, to heal from emotional wounds,” says Bhadreshwar.

Wounded animals are treated with warm baths (to scrub off dead cells) along with the application of turmeric to expedite the healing of wounds. Tarun Gogoi, a keeper, says every moment with these animals is delightful: “The joy of seeing slow as well as steady recovery in a wounded animal is addictive.” Tarun damaged his fingers 2 years ago, trying to save a leopard which was attacked by a mob close to the Kaziranga National Park. On the ground, it is a touching site to see baby animals interacting with their keepers and often playing with them. “It is all for fun,” says the amused keeper.

Animals like elephants are social animals and cannot be left alone. Therefore, keepers train and teach them to make friends with their own species, even though the animals could be hesitant initially. At the wildlife rehabilitation center, animals are kept in small enclosures called ‘boma,’ where they are fed as well as monitored before they are shifted to bigger ones. Baby animals are bottle-fed every 2 hours. Acclimatization is a rather vital part of this rehabilitation process. This varies with the age of an animal as well as its physical condition. Though most animals brought to the rehab center are displaced temporarily, several need long-term acclimatization for rehabilitation. The period could even be a life time.

Animals like clouded leopards are acclimatized at night, under the eyes of keepers who take them on walks. Leopard cubs begin to learn skills such as hunting even though being hand-raised in transit homes. After they are released, they are able to find opportunities to try and refine their skills.