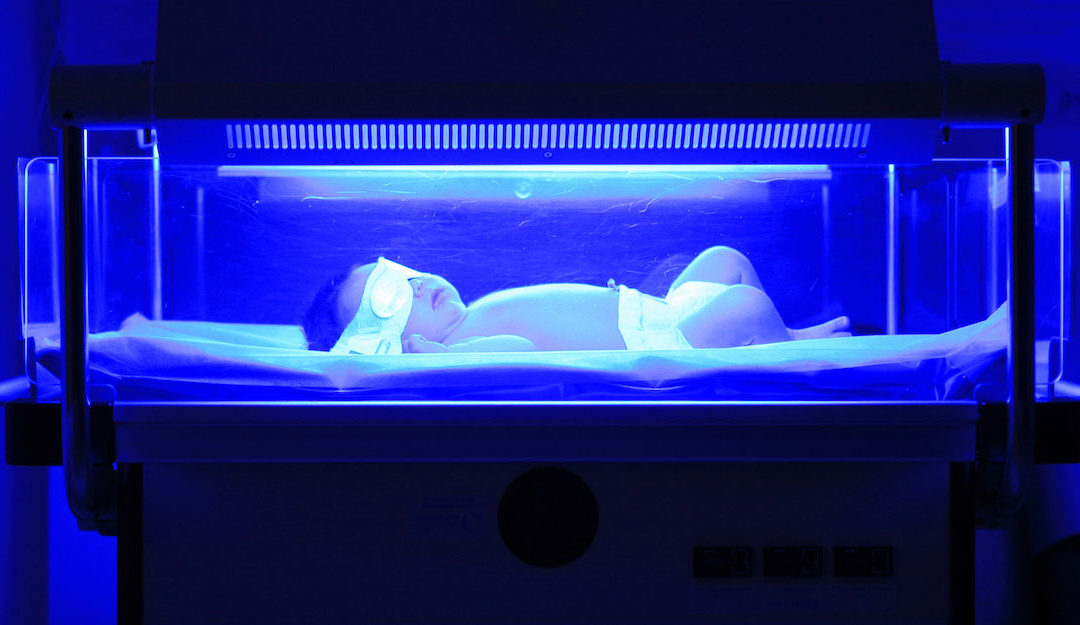 Two Indian engineers have invented a portable photo-therapy device which allows parents treat jaundice within the comfort of their homes. The Neolight system is based on blue light-emitting diodes (LED) that can be used at home. It works on solar as well as battery power. The photo device can produce different wavelengths of light for the treatment of varying severities of infant jaundice.

The Neolight system is just the size of a laptop and it can be comfortably lifted with one single hand. This allows parents to treat newborn jaundice at home rather than visit a hospital. It is handy and can be carried in a backpack. Through the use of the LEDs, there is a longer life than traditional halogen lamps. The device has been able to get 510(k) clearance from the US Food and Drug Administration (FDA) and can now sell the photo-therapy system.

How it started? The big idea behind solar device for infant jaundice

In the year 2012, 21 year-old engineer Sivakumar Palaniswamy was visiting Indian hospitals as an R&D engineer. He was associated with a medical device firm which was into developing neonatal incubators. He came across the terrible conditions that infants suffering from jaundice were subjected to. The distressing sight at a hospital located in India was as follows: There was one single halogen bulb which hung from a ceiling and it was illuminating many newborn babies in bassinets. Actually, the halogen bulb was put up to treat infants with jaundice.

‘I saw multiple infant deaths due to jaundice. Main causes of death were a lack of funds and devices in hospitals,’ he recalls.

Jaundice is a yellow discoloration of the skin and it affects about 14 million newborns each year. Around 6 out of 10 infants globally get diagnosed with jaundice. According to the World Health Organization (WHO), around 5.4 million infants in Southeast Asia as well as Africa suffering from jaundice, are untreated every year. Around 1,293 infants are dying or suffering brain damage each day: an appalling reality in today’s age. Infant jaundice stems from an amassing of bilirubin, which is a byproduct of the break-down of red blood cells. If not treated properly and on time, infants may develop hazardous levels of bilirubin which can cause cerebral palsy, deafness, and other types of brain damage.

This disease or condition, that is infant jaundice, can be treated through the use of phototherapy: which is exposing a newborn baby to certain wavelengths of light for a prescribed period of time. In this situation, Palaniswamy realized one halogen lamp was not a sufficient solution to the condition. Thus, an idea was born that very day in a neonatal unit of an Indian hospital. This idea has grown into a startup organization through the support of entrepreneurship programs at the Arizona State University.

‘I found phototherapy devices were too expensive or required steady supply of electricity in order to provide adequate care to newborn babies in need… resources which are not available in a developing country,’ says Palaniswamy. ‘Infants were suffering from a condition entirely treatable. I realized the approach to treat infant jaundice needed improvement.’

How the duo joined forces to build the solar photo device

Palaniswamy and Vivek Kopparthi, who was a childhood friend as well as an electrical engineer, generally spent evenings while discussing the social challenges surrounding them and how their education can help to solve them. Once when Palaniswamy narrated the hospital scene, they immediately knew they had a problem on their hands that could be solved and had been ignored till then.

In the year 2013, Kopparthi as well as Palaniswamy moved to the United States of America in order to pursue their graduate degrees in business management and biomedical engineering, respectively. They then joined forces with Chase Garrett, who was a master’s student majoring in legal and business studies. They were joined by Deepakshyam Krishnaraju, who was a mechanical engineering student, in order to brainstorm various solutions for treating the infant jaundice.

How health and medical devices startup company NeoLight was built

‘We had an idea and hustle. We were one out of 20 startups which received office space, mentors, and $25,000 to grow an idea into a product and then into a company,’ Vivek recalls.

In the year 2014, Siva as well as Vivek started Neolight to provide a smart solution to infant jaundice. Started by the friends and with a paltry $7,000 grant, today Neolight has a full-fledged team of 12 employees. Vivek says they attract industry leaders in MedTech, have partnerships with US hospital systems, and have been able to raise more than $3.5 million.