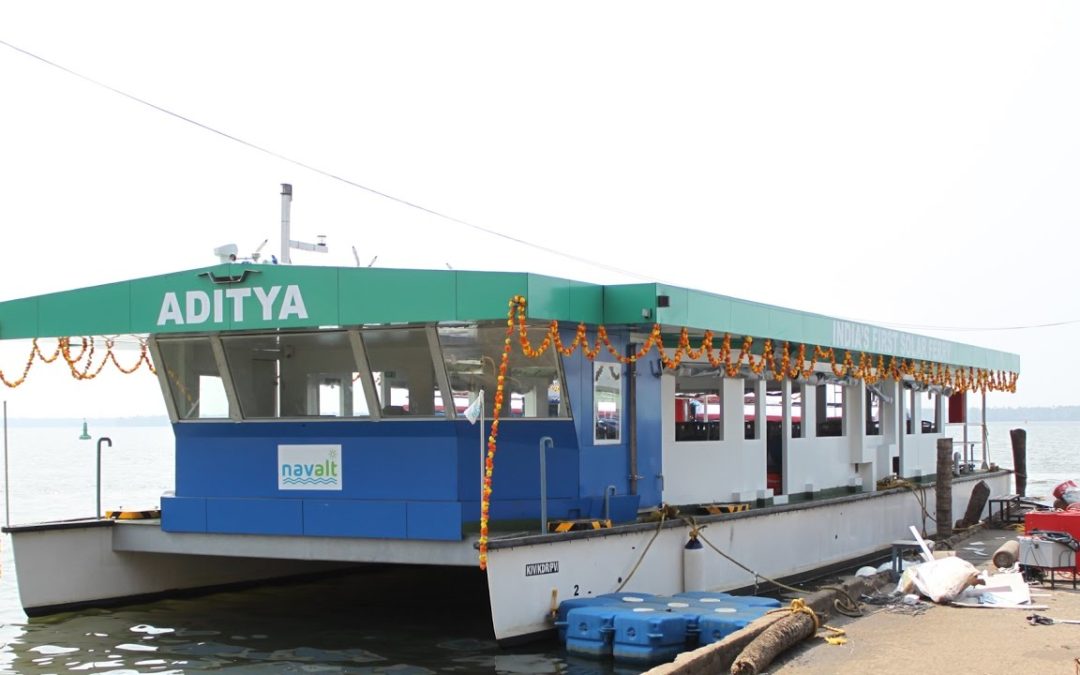 India is one of the fastest growing economies of the world. Due to rapid urbanization and reckless development, the environment has been at the receiving end. There is massive pollution; Delhi Smog has been a grim reminder. Pollution kills millions of people every year. India occupies the top position globally as far as pollution-linked deaths are concerned. Pollution is the biggest killer; with 2.51 million killed in 2015, according to the medical journal The Lancet. A major reason for such widespread pollution is vehicular emissions. If green vehicles are used, there can be a significant let up in pollution. Aditya, India’s first solar ferry, is a step in this direction.

India has 14,500 km of waterways that are navigable. However, water transport remains underutilized; Barely, 0.5 percent of transport occurs in inland waters. This is small considering water transport which exists in countries such as China, Bangladesh, or Germany, where inland movement exceeds 10 percent. A main reason for the shortfall is the huge costs associated with it. Moreover, traditional water transport is fraught with issues such as oil spills and emissions from conventional fossil fuel engines. They are destroying the environment and ecosystem. Therefore, replacing such boats with those powered by solar energy can be a shot in the arm for to the environment.

Solar ferry can be boon for pollution-battling India

A solar power ferry which comes with low operational costs and doesn’t pollute the water or the environment is one of the most feasible solutions that can be thought to combat the problem. Meet innovator Sandith Thandasherry, the man behind India’s first solar-powered boat called Aditya. The Rs 1.7 crore solar ferry makes no noise and doesn’t cause pollution, unlike diesel powered boats. The solar ferry is cheaper to run too. The 75 seater solar-powered passenger boat is the first of its kind in India. It has been built by NavAlt, a Kochi based joint venture (JV) in collaboration with a French company. Sandith Thandasherry is the marine architect heading the enterprise.

‘We are making water transport more efficient. Our target is to bring energy needs down to zero. With solar ferries and cruise boats, we are addressing 3 critical issues: reduction of polluting emissions, reduction of energy consumption, and noise from conventional propulsion systems, and, technical and economic advancement of boating industry,’ told Sandith Thandasherry to a media house.

The 20 meter long, 7 meter wide solar ferry has a maximum cruising speed of around 7.5 knots. It is being used by the Kerala State Water Transport Department (KSWTD) in the backwaters of Alappuzha. A conventional boat can cost Rs 1.9 crore. The cost of the diesel fuel is about Rs 25 lakh. Being solar powered, there are no running costs associated with operating the passenger boat, Thandasherry points out. The solar boat is also being subsidized by the Union Ministry of New and Renewable Energy. The solar ferry can run for 5 to 6 hours on a normal sunny day. It also has an alternative power system for emergencies. The solar ferry’s battery can be charged by plugging into normal electric circuits at the end of the day. The KSWTD operates the boat on the 2.5 km long Vaikkom-Thavanakkadavu route.

The company has been able to make a 20 seater solar powered boat for one of the tourism operators in Bhatinda, Punjab. The solar ferry’s need for powerful propulsion, results in the engine churning out 40 kW power. The Lithium battery pack is being used in the passenger ferry.

‘There is scope for building more solar power boats; Maharashtra has shown interest in these boats,” said Thandasherry in a media interview. He added that even houseboats can be solar-powered if the shape is tweaked and solar panels can be accommodated.

Inland water transport is the most efficient, economic, and environment friendly world wide. It can also be the cheapest means of transport. With 44 rivers, back waters, canals, and lakes, Kerala is ideally suited for such traveling and transportation. It can also generate tourism for the state.