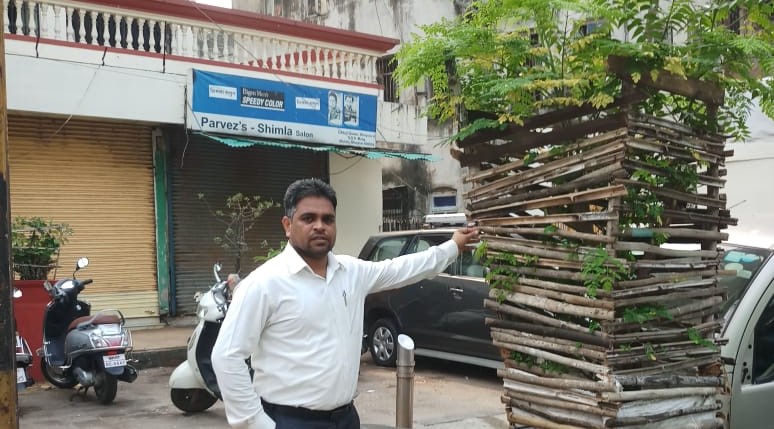 About five to seven years ago, there were many trees planted adjacent to a busy street in Mumbai. However, the new trees were either not looked after well or were deliberately allowed to die by unscrupulous commercial shopkeepers because of obstruction of their shop views. The loss of trees causes a huge damage to urban environments, endangering the health of the citizens with poor air quality. A detailed study report on this serious issue found by analyzing aerial photographs of tree cover in 20 cities, that cities suffer a net loss of 4 million trees annually! Civil Action and Environmental Activism is therefore the need of the hour.

Instead of keeping quiet about the lack of trees in their area, Javed Shaikh decided to do something about this issue. He realized that it was not that simple a task, as just planting a tree in the sidewalk. There were lots of steps involved regarding a simple task as planting a tree in an urban area! They had to approach the tree plantation department of the local municipality with a request letter. An authorized officer would then visit the site and give his approval. Usually, a flowering tree would be planted by the authorities which would soon die if it was not looked after well by the indifferent workers.

Environmental Activism: Javed Sheikh Spends from his own Pocket to keep the trees Alive

On such sites, Mr. Javed Sheikh decided to spend from his own pocket and plant the rich oxygen giving Neem tree or the shady peepal tree. He spent for fertilizers and appointed special people to water and look after these baby trees. When the metal enclosure kept for the safety of the tree was robbed, Mr. Javed himself got new bamboo enclosures made to ensure that the Neem trees grow in a safe and sound manner.

If more private citizens like Mr. Javed take responsibility and conduct Civil Action and do Environmental Activism for providing a green cover in our public city streets, then we can all live in a better environment even in crowded urban areas.