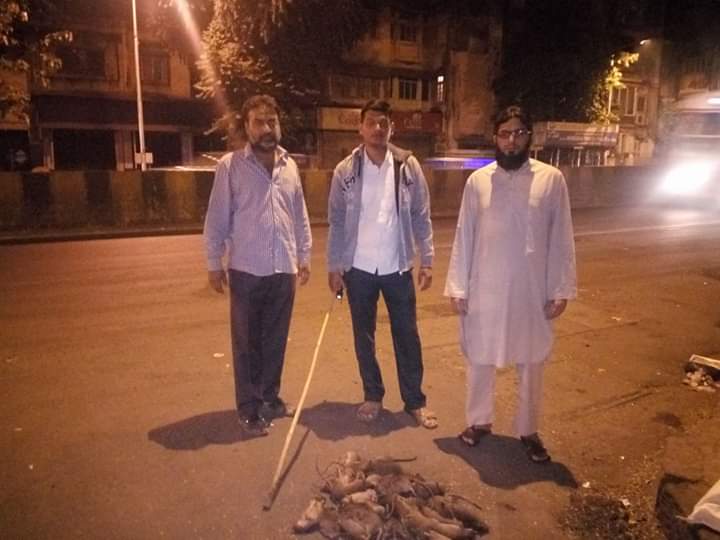 Rats are one of the most destructive species that mankind has ever faced. Figures compiled by the Rice Knowledge Bank (RKB) show that in India, an estimated 25-30 percent of post-harvest stored grains are lost each year as a result of rodents. Rat behaviour studies have been intensively done by rodentology experts like Dr. Bobby Corrigan which prove that in urban areas, the ever increasing population of rats have caused a huge negative impact on the environment.

Citizens Farooque Dhala and Irfan Machiwala were shocked at the growing menance of the big number of rats in their locality. The rats would keep gnawing at electrical cable systems, especially the wires under parked cars, and cause disruption of power supply. With their strong teeth, these huge rodents would keep burrowing under the pavements, and cause disruptions in the sewage channels, spreading the unhygienic conditions. Along with other pests and worms they would keep spreading diseases by contaminating food and water supplies. Rat bites were the cause of major problems for unsuspecting passers. In their area, consistent underground rat intrusions were even damaging the foundations of old buildings.

Farooque Dhala and Irfan Machiwala decided to do something about this serious public issue. When they approached the pest control department of the local Municipal office, they were told about a special position called ‘Night rat killer’ who was in charge of 7 wards and had no time to focus only on their area. The night rat killer was scared about the rowdy elements in their area and agreed to visit their locality from 1 am to 3.30 am, provided he was accompanied by locals who would guide him to the rat infested areas.

Imagine giving up your precious night sleep for a public cause and wandering down your locality for almost two years in a row! Yes, Farooque and Irfan spent many sleepless nights accompanying the rat killers on their night prowl. With a strong odorous substance poured into into drains, nooks and corners, the rats would be forced to come out in the open and then with a blue torch, the rat killers would first stun and temporarily blind the rats, after which the rats would be killed with a stick. And the night rat killer (NRK) would be paid for every rat that was killed.

The target was to get at least 30 rats a week and in a steady operation over months, the team managed to clear the area of 5000 rats. The team also went personally to educate all the street food stall owners to put a plastic sheet on the floor and clear their place of all leftover food droppings, to avoid the rat menace. Each rat could eat almost 7 times its weight, and leave even more shit and urine droppings across the area, creating unhygienic conditions in the environment. Hidden dead rats would cause an even more unbearable stench in the area.

Each male rat would have a family of at least 20 other rats, multiplying at a fast pace. When the head rat was killed, the balance rat family would shift to the next locality, and after some time, there was an increase in the number of rats in the neighbouring area. The many bureaucrats from that area put even more pressure on the municipality to increase the rat killers and finally the whole area definitely saw a decline in the number of rats!