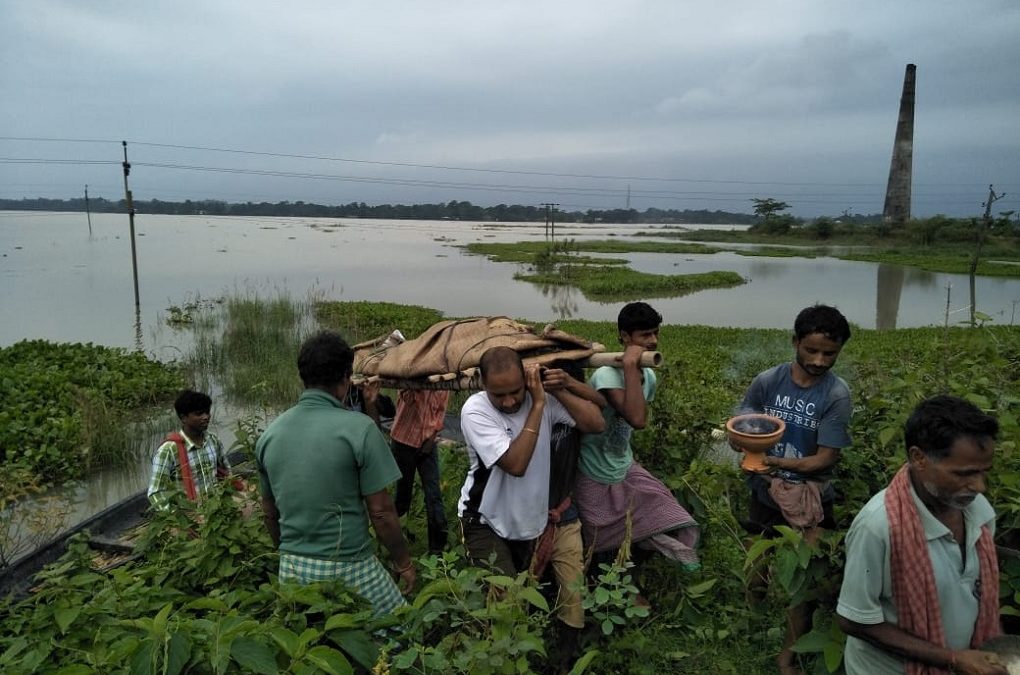 Kamalakhya Dey Purkaystha, who is a member of Assam Legislative Assembly, was the one who led the boat which carried the dead bodies of Kulendra Malakar and Mishu Malakar, people who got killed in the on-going Assam floods, from Sharifnagar in Karimganj. The bodies were cremated on Karimganj–Tripura National Highway 8, a place where thousands of flood victims are taking shelter. Around 18 people were killed in the first cycle of flooding which hit Barak and Brahmaputra Valley in the northeast India this year. The Brahmaputra as well as the Barak river systems make up one third of India’s runoff and are prone to floods. Assam gets monsoon rains and water from perennial rivers from Himalayas. Since glacial melt coincides with summer monsoon season, intensification of monsoon likely contributes to Assam floods downstream. With Assam floods, 8000 hectares (80 sq km) land is lost to river erosion per year.

The Barak and Kushiara rivers have been flowing above the danger level due to incessant rains since June 12 this year. The surge of water inundated areas of Karimganj, Hailakandi, as well as Cachar in Barak Valley. Southern district of Hailakandi was the worst affected in Assam floods with 200,000 people affected. The first flood related death got reported from the Golaghat District from the state. Sunil Mura got swept away in a flash flood in Difoloo and was recovered next day. In Dima Hasao district hit by Assam floods, 8 people as well as 5 trucks washed away in Mahur river. Whereas 6 were later rescued by State Disaster Response Force (SDRF) team, body of Thoubal Singh got recovered 2 days later.

In Brahmaputra Valley, Kapili river wreaked havoc in hill districts of Karbi Anglong and West Cachar, while flooding in Nishari river actually affected the Nagaon district. More than 40 per cent of Dibru Saikhowa National Park as well as the Biosphere Reserve submerged under flood water of Dibru river.

The Assam floods hit Barak valley. People as well as livestock washed away and thousands displaced. At present, 716 villages are submerged and 3292 ha (32.92 sq km) crop area damaged, Assam State Disaster Management Authority (ASDMA) says. Heavy rains have caused Brahmaputra and Barak to flow over danger levels. Small rivers also burst banks. Road as well as rail communication was disrupted due to flood as well as landslides between Brahmaputra and Barak valleys for many days.

The ASDMA has said on June 16 the number of flood-affected in the state had risen to 425,373 in 716 villages; 235 relief camps have been opened, where 173,245 displaced people took shelter. About 1500 villages in 10 districts got affected by the first wave of Assam floods. Personnel of National Disaster Response Force (NDRF) and State Disaster Response Force (SDRF) were able to rescue 422 people from the flood-hit areas. Border Security Force Camps inundated in flood waters and shifted to schools on India–Bangladesh border at Laksmi Bazar area in Karimganj.

Other states are not spared as well. 21 people died in Assam floods and landslides in Manipur as well as Tripura. States face infrastructural problems as bridges as well as roads washed away. Two national highways, which link Manipur to Assam and Myanmar, caved in along mountain slopes, blocking vehicular traffic for 3 days.