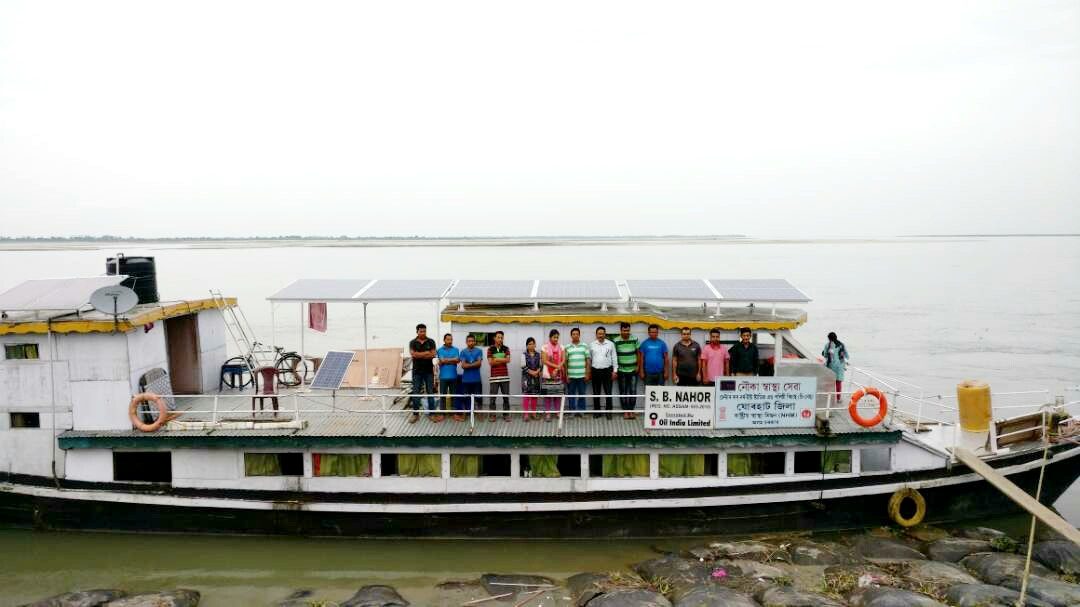 Solar-powered boat clinics equipped with solar panels can be instrumental in bringing healthcare relief for flood victims. Their efficacy has been demonstrated time and again as they are not dependent on electricity. This enables them to operate round the clock. Earlier, they had to shut operations as daylight faded. For instance, they provided succor to the desperate in the flood-ravaged areas around the Brahmaputra river (in Assam). There are around 2,500 river islands along the Brahmaputra that are inhabited by small farmers and tribals and are bereft of any development. Every year when the river overflows in monsoon, more than 25 lakh people living on these islands bear the brunt of deluge. Solar-powered boat clinics have been around since the year 2005. The floating mobile solar clinics treat 18,000–20,000 people every month. They have helped more than 20 lakh people.

Equipped with labs, an out-patient department, pharmacies, and other first-line health services, solar-powered boat clinics have been running on solar power, rather than fossil fuels. This switch has improved healthcare delivery immensely. In fact, Assam has 15 floating clinics, which serve inhabitants of river islands in 32 villages out of the 13 districts. In May, solar panels are affixed on the roofs of boats, in anticipation of approaching floods. This enables them to operate 24×7, if there is a need. Earlier, they needed to shut operations as the daylight faded away.

Solar-powered boat clinics for round the clock medical aid

Apu Bora, 27, is a farmer living on one of the river islands called Major Sapori, near the world-famous Majuli river island. He was surprised to find the mobile clinic operating even in the evening, when he visited it out of desperation. His uncle was ill. The nearest primary healthcare center was a one-hour boat ride away, which was not possible after sunset. Out of desperation, he decided to check out the boat clinic anchored close to their island in as a last attempt. To his utter relief and joy, he found that it was operational. The staff attended to his uncle, whose stomachache was relieved in an hour. The chief pharmacist of the clinic Deepjyoti Nath said that the boat is equipped with solar panels, which enables medical staff to attend to patients at any time of day.

Assam has 15 floating solar-powered boat clinics serving the inhabitants of river islands in 32 villages of 13 districts. In May, solar panels were affixed on the roof of five of them, enabling them to operate 24×7. In the year 2016, C-NES signed agreement with Bangalore-based SELCO Foundation (which was started by Magsaysay Award winner Harish Hande) in order to power the floating clinics with solar energy. Centre for North-East Studies and Policy Research (C-NES), an NGO, launched the mobile clinics in 2005. The National Rural Health Mission joined the program in January 2008 and it became a public-private partnership. In 2016, C-NES signed an agreement with the Bangalore-based SELCO Foundation in order to power the clinics with solar energy. Harish Hande, founder of SELCO, was conferred the Ramon Magsasay Award in 2011 for taking solar power to the poor. Technical partner Envo Business Solutions had fitted five of boats with solar panels in the first phase of the project. Several more are in the pipeline and have been equipped with solar panels in the later phases.

Earlier, noisy diesel generators used to power the clinics. While the engine still runs on diesel, all the other power needs are met by solar panels. Along with the lights, the solar panels also run a 50-litre refrigerator in order to store vaccines. The solar panels provide uninterrupted power supply during health camps and the night stay for their medical team. A member of the mobile health clinic said that solar energy has made life easier. He said that if the diesel generator stopped working, earlier they had to scramble in order to get it fixed urgently, otherwise the vaccines in the refrigerator would go bad. He said night services were difficult without electricity. After switching to solar power, he said their operations became hassle-free and reach increased. Jodumoni Bora, another member, said they used to spend Rs 8,000 every month on generator, but now solar panels generate almost 3kW of energy every day and also give 6 hours of backup. Fazle Illahi, general manager, Envo Business Solutions, says the main motive behind solar energy was to keep clinics operational 24×7.