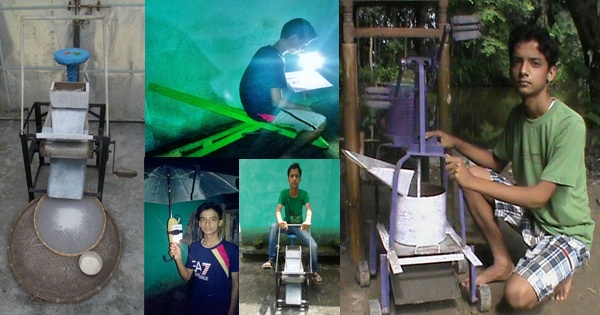 Riding a bicycle is fun for most people. In fact, bicycles are an important and cheap mode of commuting in rural India. However, riding on uneven roads, while holding an umbrella in one hand and a torch in the other, can be hassling. But that is how people in most parts of the rural country side ride after sunset in the rainy season. A young man from a village in Assam has come up with an innovation to reduce the misery of bicycle riders in harsh conditions. He is providing an umbrella mounted with a torch that is solar powered. At a mere cost of Rs. 80 to Rs. 100, this umbrella is equipped with a solar panel driven torch assembly in order to allow bicycle riders to power their way through uneven and dark country roads. Twenty-year-old innovator Dhrubajyoti Kakati came up with the solar kit after looking at bicycle riders’ misery. He calls his innovation the Umbrella Helper Box.

“It was a pain riding like this, given the conditions of the roads, especially when it is dark and raining. That is why I started thinking about trying to fix this problem,” says Kakati, who is studying agriculture in Lakhimpur’s Biswanath College. The primary occupation in his village is that of agriculture.

What is the innovation?

His technology is quite simple and cheap: A 4 inch solar plate of 6 volt capacity is fixed to an umbrella. It fuels a 6 volt battery which is attached to the umbrella’s handlebar. The battery, in turn, powers a torch with an LED bulb attached to the umbrella. The device can fit into a small carton and weighs roughly about 300 gm. Moreover, it can be controlled with an on/off button which is provided close to the umbrella handle. What is more interesting is that the carton also has a small compartment, in which one can place a mobile phone and also charge it at the same time!

For simple villagers, this small yet ingenuous device reduces the risk of riding a bicycle on muddy and slippery roads which don’t have any street lights. It is particularly useful during the monsoon season, when road conditions as well as visibility are at an all-time low.

The box which is equipped with an LED light can also be detached from the umbrella’s handle and could be used as a flashlight. The innovator claims the solar panels can charge the battery even in low sunlight conditions. Moreover, the battery can also be charged through a conventional power point.

Dhrubajyoti Kakati is a resident of Pathali Pahar village in eastern Assam’s Lakhimpur district, which is 45 km from the Lakhimpur town. The science student used to ride the bicycle for over 12 km in order to reach his school, Pichala National Academy, which is in the nearby Narayanpur town. He also saw others cycling down on slippery roads from the village to the town while holding an umbrella in one hand as well as a torch in the other. He realized soon enough that he was not the only person facing this problem.

The condition of roads as well as electricity supply in rural parts of Assam, much like the rest of India, leaves a lot to be desired. Kakati says that the village rarely gets power supply after sunset. “It is quite impossible to go out in the evening,” he says as he tries to illustrate the gravity of the problem. “Whenever we go to the Lakhimpur town, our main concern is to be back before it gets dark,” he says, adding that this was why he wanted to find a way in order to light up people’s commutes back home.

Kakati now wants to commercialize his innovation and is looking for companies to take it to the masses. He is confident that the product would find several takers in the rural areas. As his search for a partner continues, his interesting innovation is earning appreciation from the scientific community. Till now, he has exhibited his innovation in Science City (The largest science center in India) Kolkata, Regional Science Museum of Guwahati and some other science exhibitions.

“His innovation is special. It can help people in rural India commute safely. Talents such as his should be encouraged and given a platform to develop,” says Arijit Dutta Choudhury, director of Science City, Kolkata.

The young man from Assam, who draws inspiration from scientists like Thomas Alva Edison and APJ Abdul Kalam, feels that the potential of science should be used to reduce the miseries of rural India. And his innovation is trying to do just that.