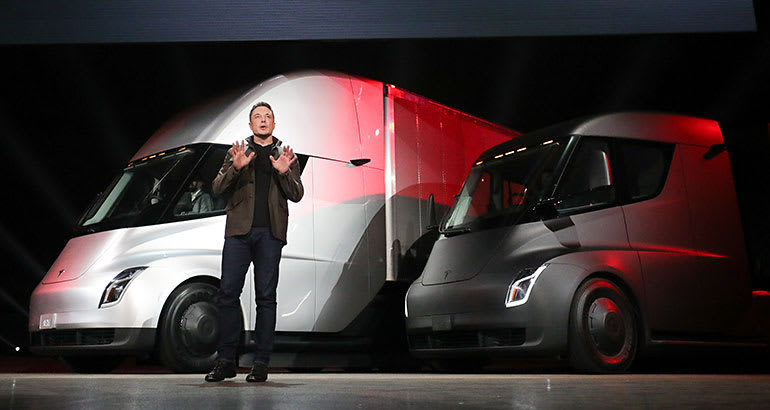 Delhi is a gas chamber. Air Quality Index recently breached the most hazardous value. It is like smoking 50 cigarettes in a day. People are now forced to leave the city. As the air quality in India’s national capital plummeted, emergency measures had to be applied to prevent air pollution from climbing further. The Delhi Government banned the entry of trucks under the GRAP measures for almost a fortnight as they contribute majorly to the city’s pollution. This was one of the measures to improve air quality. The emergency measures were taken to control the air pollution in Delhi. Long haul trucks and other commercial vehicles passing through the city majorly contribute to the air pollution. In fact, one of the primary reasons for Delhi Smog is emissions from commercial vehicles like trucks. How does one get rid of such massive pollution? A vehicle such as the Tesla Semi can help promote a healthy and sustainable environment in Delhi as well as the whole world.

Elon Musk, CEO of Tesla Inc., recently launched the Tesla’s Semi electric truck, with an 800 km range. This effectively makes it the most efficient as well as environment friendly of commercial vehicles. To be fully charged, it takes around 1 hour. However, in case there is urgency, a fast charge option could result in a 650 km range in roughly 30 minutes.

Compared to normal diesel trucks like those made by Tata or Ashok Leyland, even the most modern ones have a tank capacity of 625 liters. It takes around 15-20 minutes to tank up. A diesel truck gives a mileage of 2 km per liter, making up a 1000 km range on average. Consequently, the Tesla Semi is like a diesel truck, however, with less emissions as well as cost of operation. Elon Musk says that on a 100 mile route, Tesla Semi would average around $1.26 per mile in comparison to $1.51 for diesel trucks. This means a vehicle saves $200,000 for around a million miles. This is a huge amount. Thousands of trucks clock above a million kilometers in India.

Tesla Semi’s biggest advantage is the battery. Though Elon Musk did not disclose specifications of the battery that powers the Tesla Semi, it is said that this commercial vehicle uses ‘less than 2 kilowatt hours’ per mile. This could mean a huge battery, much like the size of a car. This could be equivalent to the weight of a car as big as the BMW. A typical 50 kWh lithium ion battery weighs around 7 kg per 1 kilowatt hour of energy. The battery that Tesla Semi uses may be as heavy as 7500 kg.

A normal diesel truck, in comparison, uses 700 kg fuel for a long distance trip. The battery would be charged through a new device termed the Megacharger. It has been made to sustain charging of 1 million miles. If the battery is charged every 500 kilometers, there will be around 2000 cycles, equal to 40 years of truck life. Additionally, the Regenerative braking system would restore 98 per cent of the kinetic energy back to the battery.

A battery driven commercial vehicle like a truck or a car needs to be designed in such a way that it is most efficient. In all this, aerodynamics has to be spot on as it plays a key role in maximizing efficiency. In this respect too, the Tesla Semi steals a march over its more conventional competitors. Interestingly, Tesla Semi is quite aerodynamic despite its large size. Elon Musk says the vehicle is more streamlined than the best available in the market. The coefficient of drag (Cd), the factor which determines the aerodynamic quality of a vehicle, is very low in comparison with other players.

Delhi and the national capital region function as a crossing point for millions of trucks due to its strategic location. Delhi is a gateway for commercial vehicles going from North to South as well as from West to East. Therefore, queues of trucks are lined up on Delhi borders every day. They release huge quantities of CO2 and other greenhouse gases (GHG). Moreover, these vehicles create traffic issues. Many Delhiites consider them a nuisance as far as noise pollution, air pollution, and traffic is concerned. Although commercial vehicles are only allowed during designated hours, pollution remains a concern.

However, trucks are a necessary evil. They can’t be banned altogether. They supply essential needs like grocery, vegetables, etc. A long term solution is needed to reduce the pollution emanating from this source. Therefore, outdated diesel trucks need to be done away with and replaced with environment friendly commercial vehicles. Tesla Semi is a solution as it is modern and easy to operate. Tesla Inc. has provided India a solution for its persistent problems in the form of the Tesla’s Semi delivery trucks.