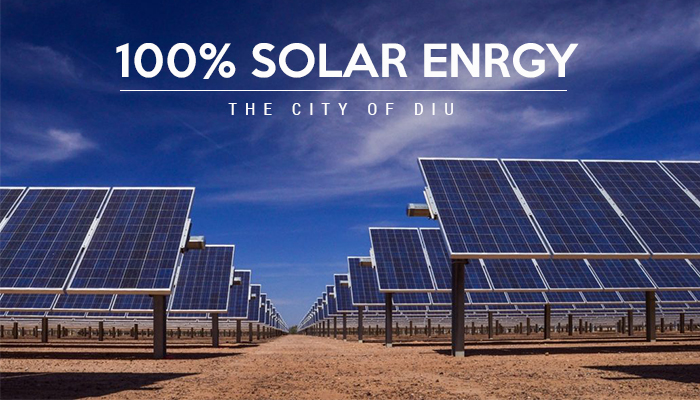 As the chorus for green and renewable energy increases world-wide, countries need to go for clean energy. And one Indian city is getting it right. The Indian Union Territory of Diu now runs 100 per cent on solar energy. In a span of just three years, Diu, also a sizable city, made rapid progress as far as solar power generation is concerned. Spread in a geographical area of 42 sq km, Diu is the first Union territory, where over 100 per cent electricity requirement is met from solar power. Despite scarcity of land, solar power plants are installed in more than 50 acres of land. The city generates around 13 megawatts of electricity from solar power generation facilities. Around 3 Mega Watt is got through rooftop solar plants, while 10 MW by the rest of the solar power plants.

Moreover, India has set an ambitious solar energy target of around 100 GW by the year 2022. In order to achieve that such steps are needed. India has also pledged 175 Giga Watt of renewable energy generation. Such news give confidence to India’s renewable energy sector. The Indian government has to make it a prime focus. Renewable energy development has taken strides.

“Population of Diu is 56,000 only. For water and electricity, the Union territory was dependent on Gujarat government. To overcome the limitation, administration of Union territory decided to set-up solar power plants in Diu,” says Daman and Diu electricity department’s executive engineer Milind Ingle.

Ingle says: “Diu’s peak-time demand for electricity goes up to 7 Mega Watt and we generate 10.5 Mega Watt of electricity from solar energy daily. This is more than consumption demand requirement.”

He also added that solar power is a relief for local residents as their monthly charges see a cut of 12 per cent. Previously, 0–50 unit charge was Rs. 1.20 per unit, 50–100 units was Rs 1.50 per unit. Now, the Joint Electricity Regulatory Commission for the state of Goa and Union territories has removed the 0–50 unit slab because electricity is generated from solar power plants in Diu. They have revised the 1–100 unit charge at Rs. 1.01 per unit.

The Government of India interventions have made India a renewable energy hub. In bidding for solar and wind energy projects, investors from across the world participate and win projects. An investment of $10.2 billion was made in 2016 in India, ranking fifth in the world. This is the result of a stable policy as well as commitment to renewable energy.

Also, India is part of the International Solar Alliance (or the ISA summit). The country has come to be regarded as a prime player as far as renewable energy and solar energy is concerned.