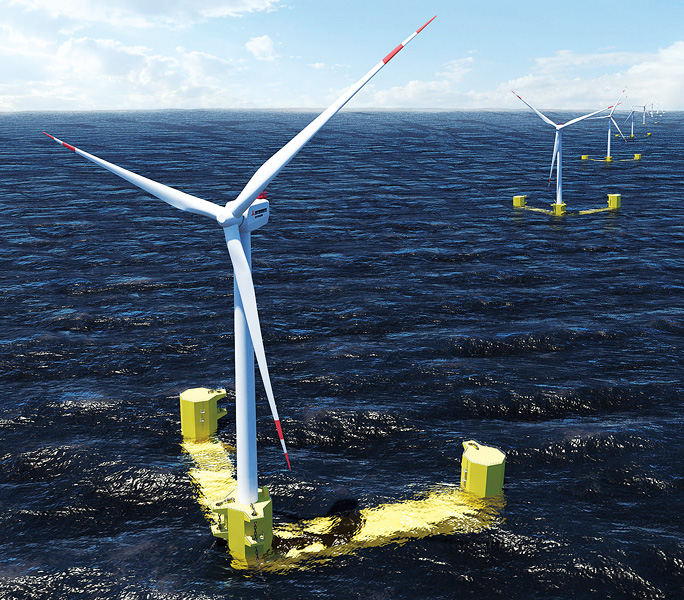 Could you even imagine wind energy turbines floating around in the ocean? Nobody can. Usually, wind energy turbines are huge structures towering higher than some of the world’s highest buildings. They are grounded and static, with a big supporting structure under water. However, all that is set to change now. Modern technology is making the impossible a possibility.

The world’s first floating wind energy farm is now functional near the north-east coast of Scotland. The revolutionary technology harvests wind power in ocean waters that have always been considered too deep for traditional and conventional wind turbines. Termed as Hywind, which is currently a pilot project, the massive structure is expected to generate electricity for around 20,000 homes. With the state of the art technology, a floating wind power farm has actually become possible now. According to its developer Statoil, as the technology gets cheaper over some period of time, huge potential avenues will open up in the oceans. The new development will be particularly helpful for coastal areas that have always been considered excessively deep and therefore unsuitable for static turbines. In fact, the output from the floating wind energy farm will perhaps equal or even outdo the power generation from the current wind farms over a period of time.

The newly developed technology would prove to be particularly useful for countries such as Japan and USA. These nations have a lot of coastal areas where the water is so deep that installing a conventional wind farm is difficult.

“This is a tech development project to ensure it’s working in open sea conditions. It’s a game-changer for floating wind power and we are sure it will help bring costs down,” said Leif Delp, project director for Hywind.
Whereas one wind turbine has been put up, there are four more which are waiting to be installed on the waters. The future of green energy farms certainly looks bright. With news coming in, it is being expected that the huge structures are being towed to Peterhead, Aberdeenshire. The huge structures once installed would float like big fishing floats.

The structure is being held upright by Statoil’s newly developed software that helps in twisting the long blades of the floating turbines and consequently helping them adapt to the motion of waves, wind, as well as ocean currents. The blades keep the 175-meter tall as well as 10,000-metric ton wind farm structure in place. The floating turbines would be able to operate in ocean waters as deep as even 1000 meters.

Global warming, climate change, and environmental degradation confront mankind, although it’s another matter that US President Donald Trump has pulled the USA out of the Paris Climate Accord. NASA—also part of the United States—figures point out globally temperatures have increased by over 1 degree since 1880; also, 9 out of the 10 hottest years occurred after 2000. By 2012, Arctic ice shrank to the lowest level. Internationally, sea levels are going up at 3.4 mm per year. It is just a matter of time before human habitation, particularly in the coastal areas, starts getting submerged. Moreover, students in the Netherlands have built the world’s first biodegradable car Lina that is electric-powered. The parts of the green car have been made from sugar beet as well as flax.