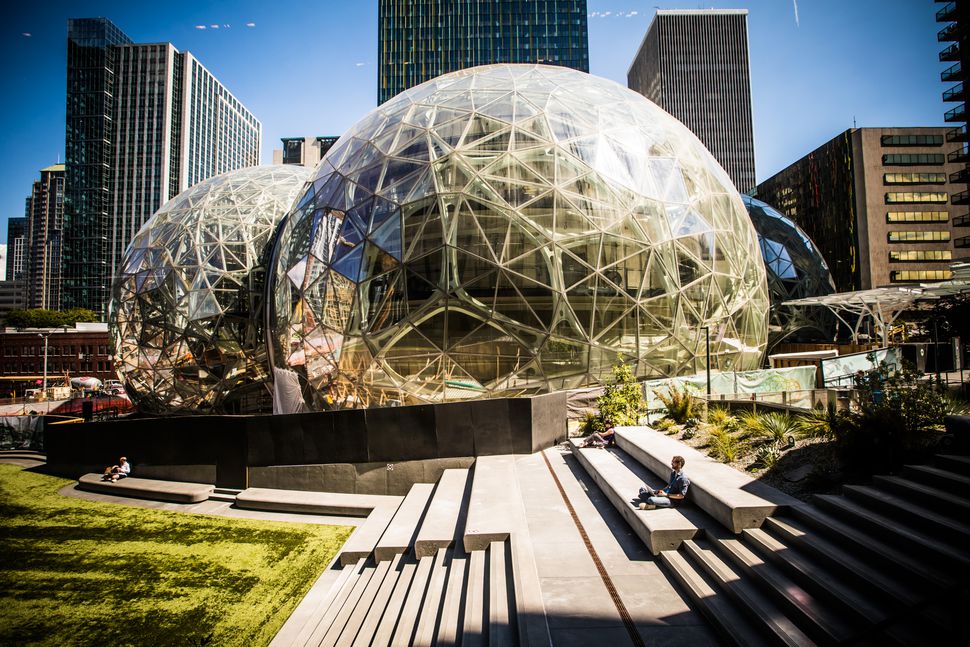 Amazon.com Inc (AMZN.O) has inaugurated a rainforest-like office space in Seattle (USA). The company believes that this will help prompt fresh ideas for its employees. The space is like a greenhouse. In the place of rooms or desks, it has walkways together with unconventional meeting spaces. The drive is part of the world’s largest online retailer to continue expanding the main campus. The company towers and eateries have taken up the place of warehouses and parking lots in Seattle’s South Lake Union District. The Spheres, which have been open to workers, symbolizes the peak of a decade’s development.

The Spheres’ 3 glass domes contain around 40,000 plants from 400 species. Amazon, which is famous for its demanding work culture, also hopes the lush environs would allow employees to reflect more and have greater chance encounters, thus producing new products, ideas, or plans. Built like a greenhouse, there are no enclosed conference rooms or office desks, rather there are open spaces for creativity to breathe, with walkways and unconventional meeting spaces lined with chairs.

Jeff Bezos, who is Amazon’s billionaire founder, opened the green building project with Amazon executives, elected officials as well as members of the media through a voice command.

“Alexa, open the Spheres,” said Bezos. A circle in the Spheres’ turned blue, like Amazon’s speech-controlled devices, whose voice assistant is called Alexa.

Amazon has invested around $3.7 billion on its buildings and infrastructure in Seattle from 2010 to 2017. This has prompted cities across North America to seek hosting Amazon’s second headquarters. Amazon has declared that it expects to invest over $5 billion in construction of HQ2 (Headquarter 2) and create around 50,000 jobs. Earlier, the online retailer zeroed down on 238 applications for its second headquarters to a figure of 20. The finalists, which range from Boston and New York to Austin, Texas, fit the bill in the sense that they are big metro cities which can attract highly-educated and tech talent.

“We wanted to create something really special, something iconic for our campus and for the city of Seattle,” said John Schoettler, Amazon’s vice president of global real estate and facilities.

At the opening of the Spheres, Governor Jay Inslee said that the project ranked along with Seattle’s Space Needle as an icon of Washington State. The Spheres, which have been designed by architecture company NBBJ, would be part of Amazon’s guided campus tours. Members of the public are also allowed to visit an exhibit at the Spheres.