Made in India: India’s 1st locally made E-Rickshaw: Go Green 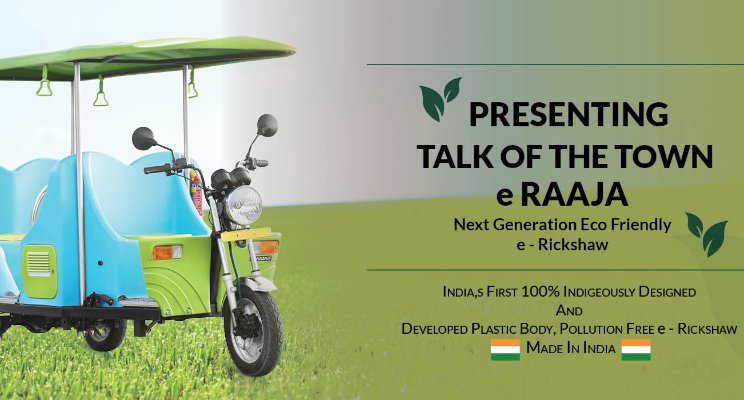 In a bid to boost the Indian e-vehicle market, India’s first 100 percent indigenously designed as well as developed E-Rickshaw or e-vehicle (called E-Raaja) has been launched. The ICAT-approved eight e-vehicles, including commercial and passenger vehicles, were launched recently.

Such efforts like e-rickshaw will help in the fight against air pollution in big cities such as Delhi and Mumbai and give a fillip to green business. The developments augur well for tackling climate change and global warming and reducing carbon footprint.

“In line with the government’s vision of a 100 percent e-mobility by 2030, we have launched multiple-usage e-vehicles. While our e-vehicles will be in market in April, launch of e-two-wheelers will take time and will be launched after government approval,” said India Managing Director Rajan Handa of OK Play, the company manufacturing the units.

OK Play plans to manufacture e-vehicles from six units spread across India and also plans to put up four more manufacturing units in the near future.

Global warming, climate change, and environmental degradation confront mankind, although it’s another matter that US President Donald Trump has pulled the USA out of the Paris Climate Accord. NASA—also part of the United States—figures point out globally temperatures have increased by over 1 degree since 1880; also, 9 out of the 10 hottest years occurred after 2000. By 2012, Arctic ice shrank to the lowest level. Internationally, sea levels are going up at 3.4 mm per year. It is just a matter of time before human habitation, particularly in the coastal areas, starts getting submerged. Moreover, students in the Netherlands have built the world’s first biodegradable car Lina that is electric-powered. The parts of the green car have been made from sugar beet as well as flax.

This is great news on the occasion of Gandhi Jayanti, the birth anniversary of Mahatma Gandhi, who was a great environmentalist.