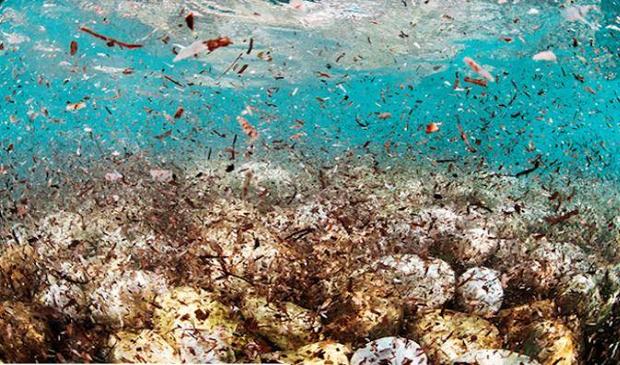 There is no doubt in this that plastic pollution is a growing worldwide problem right now, be it in water or land. Every now and then we can see images of marine animals and birds entangled in plastic waste. Years of senseless dumping of plastic waste has created a gigantic mass of the non-biodegradable material on the ocean floor. Microplastics are less than 5 mm in diameter and are derived from consequent breakdown of larger plastic particles. They can be in form of tiny beads, granules, fibres and fragments.

They are first taken up by the marine species and subsequently by the human beings, who are at the end of the food chain. They are invisible to our naked eye. Microplastics contain chemical pollutants which are hazardous to animal and plant life. One of them being, bisphenol-A which is soluble only in human fat. Microplastics usually comes from break down of large plastic items, but sometimes they are also released directly into the waste water in the form of tiny beads found in many cosmetics including toothpaste and face wash. Many tiny animals cannot distinguish between microplastics and their food, hence end up eating them. The plastic once inside the animal can travel via the food chain into many other creatures and eventually leading to potential health problems for humans also. Many a times these animals starve because their guts are blocked with plastic bags.

There is already the presence of heavy metals in seafood due to water pollution, and the addition of toxic elements from plastic makes the consumption of seafood even more dangerous. In fact, scientists say plastic waste doesn’t appear to corrode easily in saline environments, rather they gradually break down into smaller pieces due to solar radiation and other chemical processes, which leads to increase in its toxicity.

Plastic pollution is also a serious threat in freshwater, including rivers and lakes. Freshwater research is mostly focused on animals that live in the water throughout their life. But freshwater insects, for example, mosquitoes usually start their lives (as eggs) in water itself and eventually fly away when they grow up. Mosquitoes leave the water but with them take microplastics as well. This happens because aquatic insects such as mosquitoes eat both sizes of microplastics and they can keep them in their gut and kidney as they develop from a larva to a flying adult, resulting in movement of the plastic into the new food chain.

Hence any flying insect that spends some part of its life in water can become a carrier of plastic pollution. These flying insects are eaten in their thousands by predatory insects like dragon flies, bats, etc. And this means microplastics can eventually contaminate animals in a more unlikely environment, that is, the air.