Floods in India and Farmer Suicides due to Climate Change, Global Warming 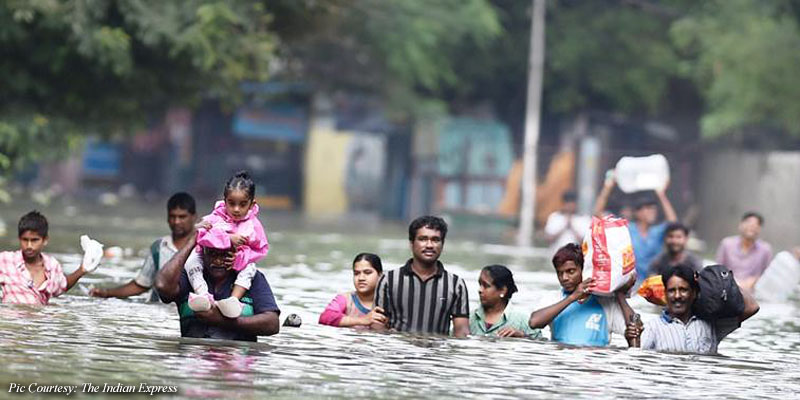 In recent times, climate change has become an acute threat to human existence and livelihood. Increasing incidences of climate change impacts such as floods, heat waves, droughts, natural calamities are not only fatal to human and animal lives but they are also causing severe economic losses. It is one of the things that is most noticeable in everyday life. According to scientists, due to global warming, there will be an increased likelihood of extreme weather condition events. In India, some regions are experiencing these changes already which are manifest in various forms including Floods in India and record setting heat waves.

Now a days, heavy rains and Floods in India have once again brought many parts of the country to standstill. More than 1000 people have died in the Floods in India this monsoon and death toll may rise as the flood waters increase. As per a United Nations report, at least 41 million people in Bangladesh, India, as well as Nepal are directly affected from flooding and landslides, which resulted from the monsoon rains which begin in June and last until September. In national capital Delhi too, an alert was issued by the government after the water levels of the Yamuna river crossed the danger mark.

Similarly, around 1500 people died due to intense heat wave this year. It was one of the worst bouts of hot weather for several years. Reports said that this year the heat wave conditions continued for a longer period than in the previous years. They also said that temperatures were 2–5 degrees higher than the seasons’ average.Poring over centuries of scientific investigation and study, it is clear that humans are responsible for most of the climate changes we have seen over the past few decades. When humans burn coal, natural gas, and other fossil fuels for producing electricity or transportation a considerable amount of greenhouse gases are released into the atmosphere. Landfill sites as well as deforestation are some other factors, which add greenhouse gases into the atmosphere, thereby causing the atmosphere to warm more and resulting into varied repercussions such as glacier melting, El Nino, etc. Human activities are disturbing the ecological balance on the earth. This results into the shifting of the seasons.

Extreme climate change is an urgent threat to humanity. It demands conclusive as well as prompt action on our part. It happens without us noticing it much. It also occurs in a manner we cannot control. However, these aspects should not deter us from taking decisive action. We need to be prepared for any kind of problem or eventuality.
A healthy planet and stable climate aren’t political issues. It should be a combined effort and now it is time to get everyone on board and pledge to follow a simple rule in life “reduce, reuse and recycle” and enjoy life to the fullest.